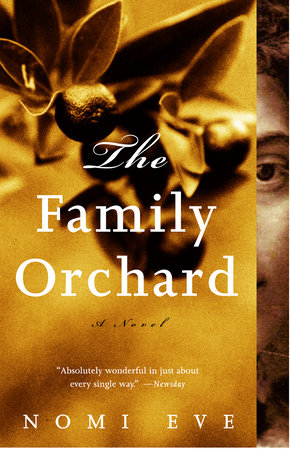 The introduction, discussion questions, author biography, and suggestions for further reading that follow are designed to enhance your group's reading of The Family Orchard, Nomi Eve's impressive debut novel, a multi-generational family history that has been hailed as "grandly imagined and beautifully executed"[Backlist].


1. The Family Orchard is preceded by a brief passage explaining the origins of the words legend, fiction, and history, and a concern for etymology appears throughout the novel. Why does Nomi Eve focus on these particular three words at the beginning of her story? In what ways does this interest in word origins relate to the novel's investigation of family origins? How can knowing the source of something increase our understanding of it?

2. The Family Orchard is filled with extraordinary people, particularly the female characters. What qualities make the women in the novel so memorable? In what unique ways do Esther, Miriam, Avra, the narrator, and others express their creativity, their sensuality, and their spiritual selves?

3. A belief in ghosts, golems, magical presences, shadow realities, and other mystical forces runs throughout The Family Orchard. When Esther and Yochanan make love, they feel "as if the passion were the real creature, and they, though temporarily deprived of the normal trappings of personhood, were lucky to have been chosen as its favorite clothes" [p. 12]. What is Eve suggesting about the relationship between physical and spiritual realities in The Family Orchard?

4. Why does The Family Orchard intersperse the brief stories told by the narrator's father with the main narrative? How do these parallel narratives relate to each other?

5. Nomi Eve frequently uses metaphor in The Family Orchard. Of Shimon's perception of Jerusalem she writes: "From the little he knew of it, the Old City of Jerusalem seemed whirlpoolish and scary. More like the entrails of some petrified prehistoric creature than a proper place to live" [pp. 61-62]. Later, she writes, "He felt his anger coming toward him from across the darkened room, like the hand of an outstretched stranger" [p. 65]. Where else does this kind of writing appear in the novel? How does it help the reader both to visualize, and to understand at a deeper level, what is being described?

6. The Family Orchard is, among other things, a passionate love story about the narrator's ancestors and her own rekindled love with Jeremy. What do these love stories have in common? How is love expressed between men and women, between parents, grandparents, and children, and between brothers throughout the novel? What scenes seem most filled with affection in The Family Orchard?

7. Shimon tells his sons, "When we graft we create something unnatural. But the unnatural thing becomes in its mature expression something that seems to have been given nature's approval. People are supposed to graft. As if it were asked of us. Part of our partnership in creation" [p. 121]. How does the act of grafting fruit symbolize romantic relationships, the growth of family trees, and human creativity generally?

9. How do Miriam and Zohar respond to the birth of their deformed son Gabi? In what ways does Gabi continue to affect the family even after he has been sent away?

10. At the precise moment when Moshe is shot and killed during the Israeli War of Independence, his twin brother Zohar, though he is many miles away working in the orchard, feels a piercing pain in his left shoulder. What does this occurrence suggest about the physical and spiritual ties that bind loved ones together? Where else does this kind of connection appear in the novel?

12. The narrator's father writes that his mother told stories to get them through the hard times, and later the narrator tells Jeremy that she will "graft our story onto the stories that came before" [p. 295]. What roles do stories and storytelling play in The Family Orchard? What other characters tell stories? How is story related to history in the novel?

13. Miriam and Zohar discover the stones of an ancient mosaic beneath their orchard. "It became clear to them that underneath all of their groves, and yes, underneath the groves of their neighbors, and underneath the groves of their neighbors' neighbors was a secret city, a mapless ancient metropolis" [p. 198]. Later the narrator digs for those stones and has her "first experience with buried treasure" [p. 200]. In what other ways does the novel explore buried realities, secrets that lie beneath the surface, or the way the past is hidden in the present?

14. What does the novel as a whole say about the value of family and family history? Why is knowing her family's history and connecting herself to it so important for the narrator? To what extent has she imagined or invented this history? Does this creative approach to the "facts" of family history diminish or enhance its value?

15. What makes The Family Orchard different from other multigenerational novels? What qualities in Nomi Eve's writing bring fresh energy to this genre?