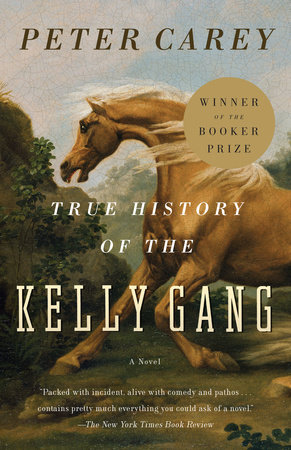 True History of the Kelly Gang

The introduction, discussion questions, author biography, and suggested reading list that follow are designed to enhance your group's reading of Peter Carey's True History of the Kelly Gang. We hope they will provide you with new ways of thinking and talking about a novel that vividly re-creates the life of Australia's most famous and most fascinating outlaw.


1. In Australia, Ned Kelly is so revered as a national icon that his image was placed on center stage during the opening ceremonies of the Summer 2000 Olympic Games. Though his legacy is still controversial and some regard him as a criminal and murderer, he is widely seen as a champion of the oppressed and a forerunner of Australian nationalism. What aspects of Kelly's character and actions might be responsible for his heroic status? What heroic feats does he accomplish in the novel? In what ways does the novel present a realistic rather than mythic or romanticized portrait of the man?

2. True History of the Kelly Gang is fiction, yet most of the characters in the novel existed as real people and many of the events are based on historical fact. What complications arise from using fiction to tell the truth? Can a factually based imaginative reconstruction present a truer or more accurate account of people than straightforward nonfiction can? What distinctive pleasures does the historical novel afford?

3. Ned Kelly begins by writing that his history "will contain no single lie may I burn in Hell if I speak false" [p. 7], and much in his narration is concerned with setting the record straight. Is Kelly a reliable narrator? Why should his history be more "true" than other versions of these events? What aspects of Kelly's voice and character convey a feeling of authenticity?

4. Why does Ned Kelly address his history to his daughter? What effect does he hope it will have on her? What are his motives for writing?

5. Throughout the novel, Ned Kelly represents himself as a person who was pushed into the life of an outlaw by forces beyond his control. "What choice did I have?" he asks, when he kills Strahan at Stringybark Creek. "This were the ripe fruit of Constable Alexander Fitzpatrick" [p. 250]. What are the forces, individual and political, that influence his fate? In what ways is Fitzpatrick responsible for this killing?

6. What effect does Harry Power have on the young Ned Kelly? What does Ned learn from him? In what ways does Ned define himself against Harry Power?

7. Looking back on the moment that Harry Power told him that he had killed Bill Frost, Ned thinks: "Now it is many years later I feel great pity for the boy who so readily believed this barefaced lie I stand above him and gaze down like the dead look down from Heaven" [p. 123]. At what other points in the novel is Ned betrayed by the dishonesty of others? What does his willingness to trust suggest about his character? Why would he liken this recollection to the dead looking down from Heaven?

8. How are the Irish in general, and the Kelly family in particular, regarded by the English in Australia? What methods do the police use to intimidate and control them? In what ways can the novel be read as an indictment of English colonialism?

9. When Tom Lloyd is arrested for the shooting of Bill Frost, Ned returns because, as he tells his mother, "I can't let Tom do my time" [p.140]. By what ethical code does Ned live? Where else does he refuse to violate this personal code of honor? How do his own ethics contrast with those of the police, squatters, and judges who are arrayed against him? What are the consequences of Kelly's strict adherence to his code?

10. What do Ned's relationships with Joe Byrne, his mother, his brother Dan, his wife Mary, and their child reveal about the kind of man he is? Why is it impossible for him to flee with Mary to America? How has his relationship with his father--and his father's history--shaped him?

11. Ned Kelly claims that his gang had "showed the world what convict blood could do. We proved there were no taint we was of true bone blood and beauty born" [p. 337]. To what extent is Ned Kelly aware of himself as an actor on the historical stage? To what extent should he be regarded as a revolutionary? What events lead to his growing political consciousness?

12. Though possessing little formal education, Ned Kelly was in fact a remarkable writer, as evidenced by the 1879 Jerilderie letter, which Kelly dictated to Joe Byrne and which survives today. What aspects of Kelly's writing, as Carey represents it, seem most distinctive? How is his writing regarded by others in the novel? What does he hope his writing--in the letter to Mr. Cameron and in the pamphlet he tries to publish--will accomplish? In what ways does Peter Carey's novel fulfill this hope?

13. True History of the Kelly Gang is preceded by an epigraph from William Faulkner: "The past is not dead. It is not even past." How does this quote illuminate what happens in the novel? In what sense do both English colonial history and Ned Kelly's personal past affect the events in the novel? What does this epigraph, and the novel itself, imply about similar contemporary conflicts in Ireland and elsewhere?

14. After his capture in 1880, Ned Kelly said, "If my lips teach the public that men are made mad by bad treatment, and if the police are taught that they may exasperate to madness men they persecute and ill treat, my life will not be entirely thrown away." In what ways does Kelly's life, as it is presented in True History of the Kelly Gang, serve as a warning about the consequences of injustice and persecution?