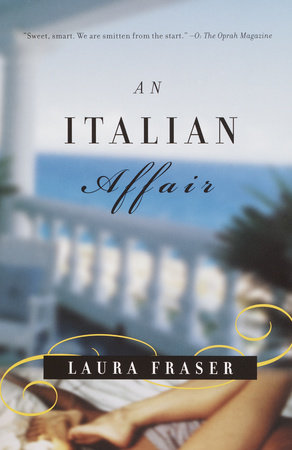 “Sweet, smart. We are smitten from the start.” —O: The Oprah Magazine

The introduction, discussion questions, suggested reading list, and author biography that follow are intended to enhance your group’s reading of An Italian Affair by Laura Fraser, a spicy and highly entertaining feast for the mind and heart.

2. How does the epigraph from Boccaccio’s Decameron relate to An Italian Affair?

3. Fraser peppers her story with comparisons between American and Italian men. For instance, she writes, “Italian men, unlike American men, like to flirt even when there’s no chance of any tangible outcome” [p. 64]. In Fraser’s experiences, how do American, Italian, and Parisian men differ in their treatment of and relations with women? Are her criticisms of American men legitimate?

4. As the year during which her ex-husband, Jon, left her comes to a close, Fraser celebrates her progress from depression to the “up-and-about phase” of recovery [p. 58]. What is this recovery process like for Fraser? Does her conversation with Jon in the epilogue [pp. 224–6] bring satisfying closure to her marriage?

5. Referring to the professor, Fraser comments that it is good for her to be in a relationship with someone whose “defects you see but don’t criticize” [p. 217]. Does she learn to apply this lesson in her other relationships, or is that impossible? How would Fraser compare the professor’s defects to Jon’s? Would this be a fair comparison? How might Fraser’s appreciation for the professor be affected if he lived in San Francisco?

7. Is Fraser successful in keeping her growing feelings for the professor in check? Does she prevent herself from falling in love with him? Does Fraser have reason to believe that he is also holding feelings back? How do these checks and balances between the heart and the mind affect a relationship?

9. According to the professor, “The problem with Americans . . . is they think a little affair will destroy a marriage. How can they be so claustrophobic? It puts far too much pressure on the marriage. That’s what will ruin a marriage” [p. 36]. How does Fraser’s experience in An Italian Affair cause her to reexamine her views on divorce and marriage and the rules and boundaries that govern each institution? Are the reader’s opinions affected? Are you inclined to judge Fraser favorably or unfavorably? What about Jon or the professor?

10. Compare Fraser’s feelings as a female traveling alone to Ischia [p. 22] with her arrival alone in Morocco [p. 208]. Does her confidence as a lone female traveler evolve over the course of her memoir?

12. Fraser captures the atmosphere of her travels through language and imagery that appeal to the senses of sight, smell, and taste. Which place did Fraser appear to enjoy the most and why? What spot was most enticing to you and why?

15. Why is the book called An Italian Affair? How does the fact that the professor and Fraser don’t speak each other’s native languages change their relationship? How does speaking Italian together affect their intimacy?