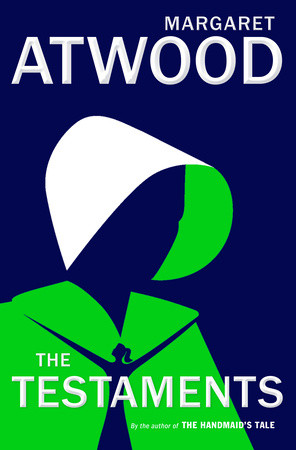 The following questions are designed to enhance your discussion of The Testaments, Margaret Atwood’s sequel to The Handmaid’s Tale.

1. Clothes play a dual role in the novel. They signal life stages as well as status and class: the pink, white, and plum dresses worn by “special girls”; the drab prison-like stripes of the Econofamilies; and the green dresses of the betrothed girls. Did this aspect of the novel strike you as odd? Or is it actually not very different from our own obsession with brands and logos that convey a certain level of wealth and status?

2. Aunt Lydia tells us that Gilead actually has “an embarrassingly high emigration rate.” Can those who manage to leave Gilead ever truly “escape”?

3. Daisy/Jade is, to say the least, a reluctant revolutionary. But if you were her age and were asked to absorb all of the shocking information she has to process in a very short period of time, would you have reacted any differently?

4. After Agnes is assaulted, she recalls other girls who reported such incidents having been told that “nice girls did not notice the minor antics of men, they simply looked the other way,” which is a troubling parallel between Gilead and reality. Do you think there will ever come a time when women will feel unashamed to speak out when they are sexually assaulted? Or has this time already arrived in the age of #MeToo?

5. When Aunt Lydia dons the garb of the female stadium shooters, she says, “I felt a chill. I put it on. What else should I have done?” What would you have done?

6. Agnes’s interpretation of “Dick and Jane” showcases Margaret Atwood’s trademark wit, but there is more to it than that. Discuss the ways in which the author cleverly builds the sense of suspicion and fear that informs the way Agnes processes the events in her life at Ardua Hall.

7. Several references are made to shortages of basic necessities such as food and electricity. Birth defects and juvenile cancer also seem to plague Gilead. What do you think has caused this? Possibly environmental issues? Or the ongoing war?

8. Agnes considers her admittance to Hildegard Library to be a “golden key” that will reveal “the riches that lay within.” But it is here that she learns the truth about the Concubine Cut into Twelve Pieces, as well as the truth about her half-sister. Is there any book that provided you with a similar pivotal and eye-opening experience?

9. When Aunt Lydia relays the Aesop’s Fables story of Fox and Cat, she reveals much about her survival skills. Which are you—Fox or Cat?

10. Did the book inspire you to take action so that Gilead remains fiction? Did you perhaps become more active in local politics or make a charitable donation to an organization that supports women’s rights?

11. The conclusion of The Handmaid’s Tale left readers with many tantalizing questions. Which of your questions were answered by The Testaments? Which were not?

Margaret Atwood, whose work has been published in more than forty-five countries, is the author of more than fifty books of fiction, poetry, critical essays, and graphic novels. In addition to The Handmaid’s Tale, now an award-winning TV series, her novels include Cat’s Eye, short-listed for the 1989 Booker Prize; Alias Grace, which won the Giller Prize in Canada and the Premio Mondello in Italy; The Blind Assassin, winner of the 2000 Booker Prize; The MaddAddam Trilogy; The Heart Goes Last; and Hag-Seed. She is the recipient of numerous awards, including the Peace Prize of the German Book Trade, the Franz Kafka International Literary Prize, the PEN Center USA Lifetime Achievement Award, and the Los Angeles Times Innovator’s Award. In 2019, she was made a member of the Order of the Companions of Honour for services to literature.