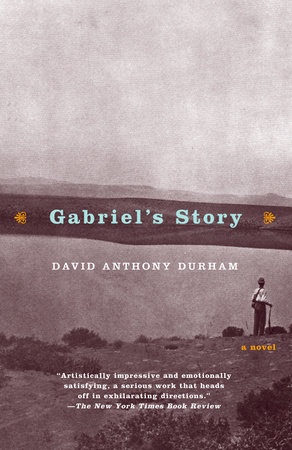 "Artistically impressive and emotionally satisfying, a serious work that heads off in exhilarating directions." —The New York Times Book Review

The introduction, discussion questions, suggestions for further reading, and author biography that follow are designed to enhance your group's reading of David Anthony Durham's Gabriel's Story, a novel that traces one boy's harrowing journey into manhood and offers a fresh perspective on both the dangers and opportunities presented by the Old West.


1. Why is Gabriel so dissatisfied and restless with his new life on the farm? What draws him away? What role does his father's death and his reaction to his stepfather play in his leaving?

2. Early in the novel, Ben and James trade insults and then fall into a wrestling match, and the narrator writes that Raleigh, the family horse, "watched them with vague and mistrusting eyes, with the air of one who had seen such behavior before and was certain it led to no good. He snorted his judgment on the two" [p. 39]. In what sense is Raleigh right? How does this competitiveness, or the instinct to violence, lead to "no good" in the novel? Are there other instances of animals commenting on human behavior? Why does the author choose animals instead of humans to convey these thoughts?

3. David Anthony Durham has been praised for his artful plotting in Gabriel's Story. How does he create suspense and surprise in the novel? What scenes are especially powerful or unexpected? What effect does Durham produce with the parallel narratives--distinguished by roman and italic typeface--running throughout the novel?

4. Gabriel's Story is a classic coming-of-age tale, in which a rebellious young boy must undertake an arduous journey and suffer tests and trials before he reaches manhood and returns home. What obstacles does Gabriel face? How does he overcome them? Why does he have to leave his family in order to be completely reunited with it? How is Gabriel different at the end of the novel than he was at the beginning?

5. What kind of man is Marshall Hogg? What makes him more complicated--and therefore more real--than the stereotypical villain of the Western genre? Where do his demons, which "had been planted in him" [p. 14] come from? What qualities does he possess beyond a criminal inclination toward violence and cruelty? Does he exhibit traits of kindness and fairness? In what ways is he a devil figure?

6. When Marshall first meets Gabriel and James, he exclaims, "The king and the archangel! Very impressive. Well, damned if I could be luckier" [p. 68]. And near the novel's end, he threatens Gabriel by saying, "Don't get any ideas, Archangel. You know who you're dealing with, don't you?" [p. 281]. Is Marshall simply playing with words, or is the author drawing a parallel between Gabriel and the archangel of the Old Testament? In what ways is Gabriel like his Biblical namesake?

7. After they pass a tribe of diseased Indians, Marshall argues with Dunlop about the fate of Native Americans, saying, "It's a sad world and the red man's been given a raw deal in it, but some sad things must come to pass in the betterment of society and mankind in general. You ever given that a thought?" [p. 95]. Why would Marshall take this view? Is he in a position to comment on "the betterment of society"? How does Marshall view Mexicans and blacks? How does he regard women?

8. What makes Caleb such a frightening character? How does his being half black complicate the novel's racial themes?

9. While Gabriel is away, a mysterious and terrifying wolf stalks the family farm. Both Hiram and Ben shoot at it and think they have killed it only to find the animal vanished, as if into thin air. At the novel's climax, when Caleb and Marshall are threatening the family, Ben discovers the wolf's remains, which he regards as a providential sign [p. 284]. How does Ben interpret this "sign"? What does the wolf symbolize in the novel?

10. When Gabriel comes upon a dead deer entangled in the branches of a tree, he observes that it "seemed somehow Biblical, some amalgamation of a burning bush and a living crucifix. . . . Once more this journey had given him an image he'd carry ever after" [p. 164]. Why is this image so potent for Gabriel? What other images sear his consciousness on his journey? What effect do these images have on him?

11. In the novel's climactic scene, as Gabriel is about to open the box in which he'd buried the gold brick, Marshall tells him that if God produces and places a second gold brick in the box, Marshall will spare them. "You people have faith, don't ya? Let's put it to the test" [p. 287]. But when Gabriel puts his hand in the box he finds a pistol instead. Is this an act of divine intervention, a reward for the family's faith?

12. How does Gabriel's Story address the grand universal themes of good and evil, human vengeance and divine retribution, the outcast and the community?

13. Why does Caleb shoot Marshall instead of Solomon and Eliza as he's been ordered to do? Which aspects of Caleb and Marshall's tangled history would make him act in this way?

14. Gabriel's Story takes place at a crucial moment in American history, just after the Civil War when freed slaves were moving north and trying to make new lives as landowners, when Native Americans were being swept from the country, and when the frontier was being fully opened to the West. How does the novel portray the changing relations between whites, blacks, and Native Americans during this period?

15. Much of Gabriel's Story revolves around family--the effects of abuse on Marshall and Caleb's family, their destruction of the "little Eden" of the Mexican family they encounter, and the trials and ultimate triumph of Gabriel's family. What does the novel as a whole seem to be saying about the importance of family?

16. What qualities make Gabriel's Story unique in the Western genre? In what ways is the West, as is it portrayed in the novel, different from the myths that have been passed down through film and popular fiction? In what ways can recent American history--especially in terms of race, gender, and family issues--be seen in embryo in Gabriel's Story?