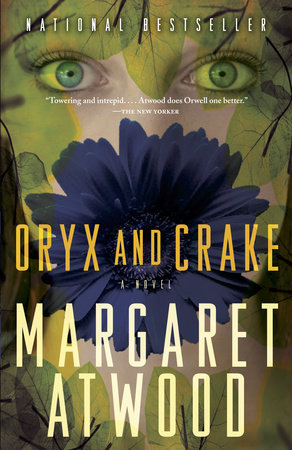 "Towering and intrepid. . . . Atwood does Orwell one better." —The New Yorker

The introduction, discussion questions, suggested reading list, and author biography that follow are intended to enhance your group’s reading of Margaret Atwood’s Oryx and Crake—a novel that takes predicting the future of humanity one chilling step further.


1. Oryx and Crake includes many details that seem futuristic, but are in fact already apparent in our world. What parallels were you able to draw between the events and surroundings in the world of the novel and those in your own?

2. Margaret Atwood coined many words and brand names while writing the novel. In what way has technology changed your vocabulary over the past five years?

3. The game “Extinctathon” emerges as a key component in the novel. Jimmy and Crake also play “Barbarian Stomp” and “Blood and Roses.” What comparable video games exist today? What is your opinion of arcades that feature virtual violence? Discuss the advantages and dangers of virtual reality. Is the novel form itself a sort of virtual reality?

4. If you were creating the game “Blood and Roses,” what other “Blood” items would you add? What other “Rose” items?

5. If you had the chance to fabricate an improved (and biologically viable) human being, would you do it? If so, what features would you incorporate, and why?

6. The pre-catastrophic society in Oryx and Crake is fixated on physical perfection and longevity, much as our own society is. Discuss the irony of these quests, both within the novel and in our society.

7. One aspect of the novel’s society is the elimination of the middle class. Economic and intellectual disparities, as well as the disappearance of safe public space, allow for few alternatives: People live either in the tightly controlled Compounds of the elites, or in the more open but seedier and more dangerous Pleeblands. Where would your community find itself in the world of Oryx and Crake?

8. Snowman soon discovers that despite himself he’s invented a new creation myth, simply by trying to think up comforting answers to the “why” questions of the Children of Crake. In Part Seven in the chapter entitled “Purring,” Crake claims that “God is a cluster of neurons,” though he’s had trouble eradicating religious experiences without producing zombies. Do you agree with Crake? Do Snowman’s origin stories negate or enhance your views on spirituality and how it evolves in various cultures?

9. How might the novel change if narrated by Oryx? Do any similarities exist between her early life and Snowman’s? Do you always believe what she says?

10. Why does Snowman feel compelled to protect the benign Crakers, who can’t understand him and can never be his close friends? Do you believe the Crakers could survive in our society?

11. In the world of Oryx and Crake, almost everything is for sale, and a great deal of power is in the hands of large corporations and their private security forces. There are more private police forces in North America than there are public ones. What are the advantages of such a system? What are the dangers?

12. The book has two epigraphs, one from Jonathan Swift’s Gulliver’s Travels and one from Virginia Woolf’s To the Lighthouse. Why do you think these were chosen?

13. The ending of the novel is open, allowing for tantalizing speculation. How do you envision Snowman’s future? What about the future of humanity—both within the novel, and outside its pages?

14. What is the difference between speculative fiction—which Atwood claims to write—and science fiction proper? In what ways does the dystopia of Oryx and Crake compare to those depicted in novels such as Brave New World, 1984, Fahrenheit 451, and in Atwood’s The Handmaid’s Tale?