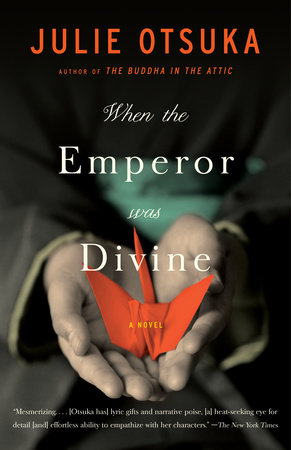 When the Emperor Was Divine

“Mesmerizing. . . . [Otsuka has] lyric gifts and narrative poise, [a] heat-seeking eye for detail [and] effortless ability to empathize with her characters.”

The introduction, discussion questions, suggested reading list, and author biography that follow are designed to enhance your group’s reading of Julie Otsuka’s When the Emperor Was Divine. We hope they will provide fruitful ways of thinking and talking about a book that brilliantly explores the experience of Japanese Americans during World War II.

1. When the Emperor Was Divine gives readers an intimate view of the fate of Japanese Americans during World War II. In what ways does the novel deepen our existing knowledge of this historical period? What does it give readers that a straightforward historical investigation cannot?

2. Why does Otsuka choose to reveal the family’s reason for moving—and the father’s arrest—so indirectly and so gradually? What is the effect when the reason becomes apparent?

3. Otsuka skillfully places subtle but significant details in her narrative. When the mother goes to Lundy’s hardware store, she notices a “dark stain” on the register “that would not go away” [p. 5]. The dog she has to kill is called “White Dog” [see pp. 9–12]. Her daughter’s favorite song on the radio is “Don’t Fence Me In.” How do these details, and others like them, point to larger meanings in the novel?

4. Why does Otsuka refer to her characters as “the woman,” “the girl,” “the boy,” and “the father,” rather than giving them names? How does this lack of specific identities affect the reader’s relationship to the characters?

5. When they arrive at the camp in the Utah desert—“a city of tar-paper barracks behind a barbed-wire fence on a dusty alkaline plain”—the boy thinks he sees his father everywhere: “wherever the boy looked he saw him: Daddy, Papa, Father, Oto-san” [p. 49]. Why is the father’s absence such a powerful presence in the novel? How do the mother and daughter think of him? How would their story have been different had the family remained together?

6. When the boy wonders why he’s in the camp, he worries that “he’d done something horribly, terribly wrong. . . . It could be anything. Something he’d done yesterday—chewing the eraser off his sister’s pencil before putting it back in the pencil jar—or something he’d done a long time ago that was just now catching up with him” [p. 57]. What does this passage reveal about the damaging effects of racism on children? What does it reveal about the way children try to make sense of their experience?

7. In the camp, the prisoners are told they’ve been brought there for their “own protection,” and that “it was all in the interest of national security. It was a matter of military necessity. It was an opportunity for them to prove their loyalty” [p. 70]. Why, and in what ways, are these justifications problematic? What do they reveal about the attitude of the American government toward Japanese Americans? How would these justifications appear to those who were taken from their homes and placed behind fences for the duration of the war?

8. What parallels does the novel reveal between the American treatment of citizens of Japanese descent and the treatment of Jews in Nazi Germany?

9. Much of When the Emperor Was Divine is told in short, episodic, loosely connected scenes—images, conversations, memories, dreams, and so on—that move between past and present and alternate points of view between the mother, daughter, and son. Why has Otsuka chosen to structure her narrative in this way? What effects does it allow her to achieve?

10. After the family is released from the camp, what instructions are they given? How do they regard themselves? How does America regard them? In what ways have they been damaged by their internment?

11. When they are at last reunited with their father, the family doesn’t know how to react. “Because the man who stood there before us was not our father. He was somebody else, a stranger who had been sent back in our father’s place” [p. 132]. Why do they regard him as a stranger? How has he been changed by his experience? In what ways does this reunion underscore the tragedy of America’s decision to imprison Japanese Americans during the war?

12. After the father returns home, he never once discusses the years he’d been away, and his children don’t ask. “We didn’t want to know. . . . All we wanted to do, now that we were back in the world, was forget” [p. 133]. Why do the children feel this way? Why would their father remain silent about such an important experience? In what ways does the novel fight against this desire to forget?

13. The mother is denied work because being a Japanese American might “upset the other employees” or offend the customers. She turns down a job working in a dark back room of a department store because she is afraid she “might accidentally remember who I was and . . . offend myself” [pp. 128–129]. What does this statement reveal about her character? What strengths does she exhibit throughout her ordeal?

14. Flowers appear throughout the novel. When one of the prisoners is shot by a guard, a witness believes the man had been reaching through the fence to pluck a flower [see p. 101]. And the penultimate chapter ends with the following sentence: “But we never stopped believing that somewhere out there, in some stranger’s backyard, our mother’s rosebush was blossoming madly, wildly, pressing one perfect red flower after another out into the late afternoon light” [p. 139]. What symbolic value do the flowers have in this final passage? What does this open-ended conclusion suggest about the relationship between the family and the “strangers” they live among?

15. When the Emperor Was Divine concludes with a chapter titled “Confession.” Who is speaking in this final chapter? Is the speech ironic? Why has Otsuka chosen to end the novel in this way? What does the confession imply about our ability to separate out the “enemy,” the “other,” in our midst?