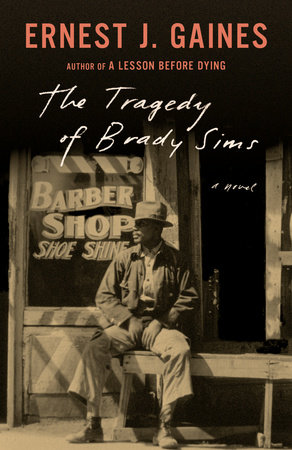 The Tragedy of Brady Sims

The questions, discussion topics, and suggestions for further reading that follow are designed to enhance your group’s reading of Ernest J. Gaines’s The Tragedy of Brady Sims, a beautifully wrought portrait of small-town life in the post–World War II American South.


1.  What does the conversation between Ambrose Cunningham and Louis Guerin convey about editor’s vs. the reporter’s understanding and opinion of the racial undercurrents that shape interactions in Bayonne (p. 11)? What does Cunningham’s reaction to the sheriff’s decision to let Sims remain free show about his understanding of how things work in the town (p. 11)?

2.  Discuss the various contradictory emotions behind Sheriff Mapes’s response to the events at the courthouse. How do they reflect and amplify the role of personal history in the town’s social structure (pp. 18–20)?

3.  Guerin begins his investigation by talking to the only black member of the jury, Mr. A. Paul (pp. 14–16). How would you characterize the way Mr. Paul is drawn? What is Gaines’s intent in presenting this portrait of an elderly African American?

4.  “Since the turn of the nineteenth century, beauty salons and barbershops have served as special places among African Americans. . . . Scholars often cite these sites as ‘sanctuaries’ for black people” (The National Museum of African American History and Culture). In what ways does Lucas Felix’s embody the timeless cultural and social functions of the local barbershop (pp. 22-23)? Can you think of other works of literature or movies that feature beauty salons or barbershops as a central part of an African American community?

5.  What does the way the men treat Guerin show about the group dynamics at the barbershop (pp. 23–24)? What role does the stranger (“the man with the fresh haircut,” p. 32) play in bringing to light the close ties among others? What other functions does he serve as the novel unfolds?

6.    Frank Jamison calls Sims “the man who whipped children to keep them out of Angola” (p. 25) and notes that “some of the old people would rather see their children dead than to go to Angola” (p. 26). Can you understand this point of view? Discuss the reasons the preacher and the members of the church offer for giving Sims the job of disciplining troublesome kids (p. 38). Is there a valid argument that the threat of incarceration (especially in a notorious prison like Angola) calls for extreme preventative actions on the part of the community?

7.    What do the facts about Sims’s life with Eula and their children (pp. 47–53) and the story of his marriage to Betty Mae and relationship with Jean-Pierre (pp. 58–60) reveal about his character and the emotions that drive him? Despite the fraught circumstances, are there aspects of Sims’s behavior that make him likable or sympathetic?

8.    Jamison says, “Brady was getting older, getting older, and he moved out of the quarter back into the field . . . he just wanted to get away from those ‘quarter niggers’” (pp. 62–63). Discuss persistent racial biases as well as the specific events behind Sims’s decision to move to an isolated farmhouse. Does his new life alter the way he sees himself and is seen by others?

9.   Raised in California, Jean-Pierre returns to Louisiana and his father’s house. What does his approach to finding work and the reactions he gets around town show about generational and regional differences in mid-twentieh-century America (pp. 64–76)? Why does Sims insist that Jean-Pierre leave his house and move into town?

10.   What does the introduction of the men from California looking for “Louisiana Roy” add to the novel? How do the descriptions of the men in the car, the “sissies” they encounter, and the ins-and-outs of their search of the area differ in tone and mood from the earlier vignettes (pp. 77–85)?

11.   In what ways does the bank robbery serve as a fitting climax to Jean-Pierre’s naïve and ill-conceived return to Louisiana?

12.    As he goes to arrest Sims for shooting Jean-Pierre, Mapes says, “Why? Why? Why did you do it? Hell, I know why. I damned well know why” (p. 100). Did your feelings about the murder of Jean-Pierre change over the course of the novel as you learned more about Brady Sims and the circumstances of his life?

13.    Gaines shifts the point of view of the story to Sheriff Mapes (pp. 99–107). Do Mapes’s musings about the past and the present and about his personal friendship with Sims cast new light on both men and on the community in general? Does the final scene between Mapes and Sims ring true?

14.   The impact of World War II and the Great Migration on the African American community is a running topic of discussion at the barbershop. What insights do the differing points of view presented by Frank Jamison and Joe Celestin offer into the changes that occurred in both the South and the North (p. 33)? To what extent do their views represent an on-going debate about the advantages and the disadvantages of city life and small-town life?

15.   In his award-winning novel, A Lesson Before Dying, Gaines created a cast of strong women. The characters and voices in The Tragedy of Brady Sims are all male. How does this affect your perspective on the social structures and relationships in the town? In what ways does the switching back and forth among narrative voices, as well as the frequent use of flashbacks, enrich the reading experience?

16.   Does the novel add to, change, or contradict your understanding of the African American community in the late 1940s and early ’50s? What does it expose about the entrenched traditions that protect and perpetuate an inherently unjust society?