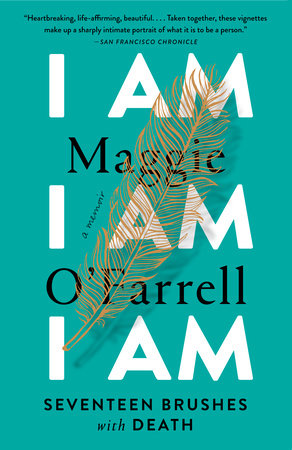 The questions, discussion topics, and reading list that follow are intended to enhance your reading group’s discussion of I Am, I Am, I Am, the astonishing memoir via near-death experiences by Maggie O’Farrell.


1. The title of the book comes from a passage in Sylvia Plath’s The Bell Jar, in which a character seems to be reminding herself she’s still alive. Why is this an apt title for this memoir?

2. O’Farrell skips around in time rather than telling her stories chronologically. Why do you think she does this? What effect does it have on the reader?

3. Why has O’Farrell had so many near-death experiences—is she merely unlucky, or does something else explain it?

4. In “Neck,” O’Farrell describes her job at a retreat: “I clear away human traces, erasing all evidence that they have eaten, slept, made love, argued, washed, worn clothes, read newspapers, shed hair and skin and bristle and blood and toenails.” (page 5) Why does she view her work this way? What does it tell us about her?

5. We learn about O’Farrell’s neurological condition in “Lungs” (2000), when she seems to be on her way to drowning. What drives her to risk her life like this, when she knows her own limitations?

6. The chapter in which O’Farrell narrowly avoids being hit by a car is called “Spine, Legs, Pelvis, Abdomen, Head.” What does this refer to?

7. When she fails to secure postgraduate funding, O’Farrell abandons her fascination with Sir Gawain and the Green Knight: “I must shut the door on it—and her. I liked my connection with her, through the words of the story. I relied on it. I felt as though I had reached back through time, down through the pages of the book, and taken hold of her hand. But I must give her up. I won’t read the book again for many years.” (page 53) Why does she feel this way?

8. In various places throughout the book, O’Farrell paints herself in a negative light—for instance, says, “I am too volatile, too skittish, too impatient.” (page 54) What do you, the reader, think of her self-portrait?

9. How does the incident on the plane propel O’Farrell into writing?

10. Several of O’Farrell’s near-death experiences relate to the fact that she’s female. What role does gender play here?

11. At O’Farrell’s near-catastrophic childbirth, a mysterious man in beige steps in with an unexpected kindness. She writes, “When he took my hand he taught me something about the value of touch, the communicative power of the human hand.” (page 92) Why does this have such an impact on her?

12. After her “missed miscarriage,” what makes O’Farrell so reluctant to have the operation?

13. In the chapter entitled “Lungs” (2010), O’Farrell discusses her childhood fascination with the myth of the selkie. (page 120) Why does she think of this when she’s caught in a riptide? How does the memory help her?

14. What do we learn about O’Farrell from the story about the knife thrower?

15. In “Cranium” and again in “Bloodstream,” two chapters dealing with infidelity, O’Farrell switches to third-person narration. Why? How does this change your reading experience?

16. On page 206, O’Farrell recalls her father’s admonition, “Stay in your depth!” Aside from the drowning connotations, where else could this apply in her life?

17. In “Cerebellum,” we learn that many of O’Farrell’s behaviors may be a result of her childhood bout with encephalitis. How does this change your opinion of her?

18. O’Farrell describes the period during which she was sick as one of the key points in her life: “The hinge on which my childhood swung. Until that morning I woke up with a headache, I was one person, and after it, I was quite another.” (page 226) Looking beyond the physical and neurological effects of encephalitis, what does she mean?

19. Several times in “Daughter,” O’Farrell wonders what she did to cause her daughter’s condition. Why does she seek to blame herself?

20. O’Farrell ends her memoir with an echo to the title: “She is, she is, she is.” Why does this phrase resonate with her?