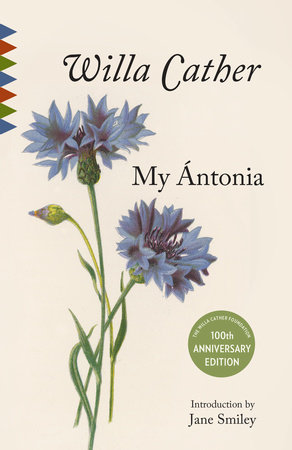 The questions and discussion topics that follow are designed to enhance your group's reading of Willa Cather's My Antonia. We hope that they will provide you with new ways of looking at--and talking about--a novel that represents Cather's astonishing powers of narrative selection and juxtaposition; her ability to create believably complex characters who take on mythic dimensions in the reader's imagination, and the historical vision that could celebrate the American past without minimizing its hardships and moral ambiguities.


1. The first narrator in My Antonia is an unnamed speaker who grew up with Jim Burden and meets him years later on a train. Jim tells his story in response to this mysterious figure, who disappears from the novel as soon as the Introduction is over. How does this first narrator's disappearance foreshadow other withdrawals within this novel, which at times resembles a series of departures? Why might Cather have chosen to frame her narrative in this fashion?

2. When Jim arrives in Nebraska, he sees "nothing but land: not a country at all, but the material out of which countries are made." [11-12] Yet at the novel's end that landscape is differentiated. It has direction and color--red grass, blue sky, dun-shaded bluffs. We are reminded of the beginning of the Book of Genesis, and of God's parting of the heavens from the earth. To what extent is My Antonia an American Genesis? What are its agents of creation and differentiation?

3. Just as My Antonia's setting is initially raw and featureless, its narrative at first seems haphazard: "'I didn't arrange or rearrange. I simply wrote down what of herself and myself and other people's Antonia's name recalls to me. I suppose it hasn't any form.'" [6] Is Burden's description really accurate? Although the narrative proceeds chronologically, its structure is unconventional, as Antonia is present in only three of the five sections and much of her story unfolds via exposition. What effect does Cather produce by telling her story in this fashion?

4. One of the greatest difficulties facing the Shimerdas and other immigrant families is that posed by their lack of English, which seals them off from all but the most forthcoming of their neighbors. Yet even American-born arrivals to Nebraska find themselves set apart. As the narrator notes in the Introduction, "no one who had not grown up in a little prairie town could know anything about it. It was a kind of freemasonry, we said." [3] What is the nature of this freemasonry? What experiences do the inhabitants of this world share that are alien--and perhaps incommunicable--to people raised elsewhere? Does the shared experience of the novel's pioneers end up counting for more than their linguistic and ethnic differences?

5. What is it that makes Mr. Shimerda unable to adapt to his new home and ultimately drives him to suicide? Is he simply too refined--too rooted in Europe--to endure the harshness and solitude of the prairie? Before we jump to too easy a conclusion, we might consider the fact that the novel's other suicide, Wick Cutter, is a crass, upwardly mobile small-town entrepreneur. What do these two deaths suggest about the prerequisites for surviving in Cather's world?

6. From their first meeting, when Jim begins to teach Antonia English, he serves as her instructor and occasional guardian. Yet he also seems in awe of Antonia. What is it that makes her superior to him? What does she possess that Jim doesn't? What makes her difference so desirable?

7. At times Jim's feelings towards Antonia suggest romantic infatuation, yet their relationship remains chaste. Nor does Jim ever become sexually involved with the alluring--and more available--Lena Lingard. Curiously, Antonia appears to disapprove of their flirtation. And, whether he is conscious of it or not, Jim seems wedded to the idea of Tony as a sexual innocent. Following the failed assault by Wick Cutter, "I hated her almost as much as I hated Cutter. She had let me in for all this disgustingness." [186] How do you account for these characters' ambivalent and at times squeamish attitude toward sexuality? In what ways do they change when they marry and--in Antonia's case--bear children?

8. Just as it is possible to read Lena Lingard as Antonia's sensual twin, one can see the entire novel as consisting of doubles and repetitions. Antonia has two brothers, the industrious and amoral Ambrosch and the sweet-natured, mentally incompetent Marek. Wick Cutter's suicide echoes that of Mr. Shimerda. Even minor anecdotes have a way of mirroring each other. Just as the Russians Peter and Pavel are stigmatized because they threw a bride to a pursuing wolf pack, the hired hand Otto is burdened by an act of generosity on his voyage over to America, when the woman he is escorting ends up giving birth to triplets. Where else in the novel do events and characters mirror each other? What is the effect of this symmetry and its variations?

9. In one of her essays, Willa Cather observed, "I have not much faith in women in fiction." [cited in Hermione Lee, Willa Cather: Double Lives. New York, Vintage, 1991, p. 12] Yet in Antonia Cather has created a genuinely heroic woman. What perceived defects in earlier fictional heroines might Cather be trying to redeem in this novel? Do her female characters seem nobler, better, or more deeply felt than their male counterparts? In spite of this, why might Cather have chosen to make My Antonia' s narrator a man?

10. For her epigraph Cather uses a quote from Virgil: Optima dies...prima fugit: "The best days are the first to pass." How is this idea borne out within My Antonia? In what ways can the novel's early days, with their scenes of poverty, hunger and loss, be described as the best? What does Jim, the novel's presiding consciousness, lose in the process of growing up? Does Antonia lose it as well? How is this notion of lost happiness connected to Jim's observation: "That is happiness: to be dissolved into something complete and great"?

11. Although My Antonia is elegiac in its tone--and has been used in high school curricula to convey a conservative view of the American past--it is also notable for its striking realism about gender and culture. Not only does the novel have a female protagonist who prevails in spite of male betrayal and abuse (and two secondary female characters who prosper without ever marrying), it also portrays the early frontier as a multicultural quilt in which Bohemians, Swedes, Austrians, and a blind African-American retain their ethnic identities without dissolving in the American melting pot. Significantly, at the novel's end Antonia has reverted to speaking Bohemian with her husband and children. How important are these themes to the novel's overall vision? Do they accurately reflect the history of the western frontier?