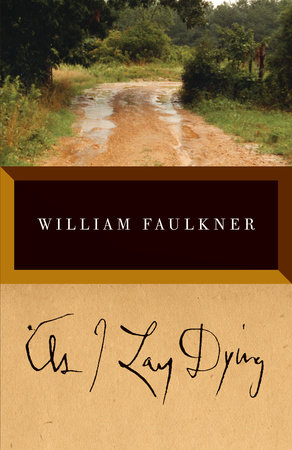 As I Lay Dying

The questions, discussion topics, and author biography that follow are designed to enhance your group's reading of three of William Faulkner's greatest novels: The Sound and the Fury, As I Lay Dying, and Absalom, Absalom! We hope that they will provide you with new ways of thinking and talking about three works that stand as major landmarks in the history of modern American literature, works that exemplify Faulkner's bold stylistic and formal innovations, his creation of unforgettably powerful voices and characters, and his brilliant insight into the psychological, economic, and social realities of life in the South in the transition from the Civil War to the modern era. In their intellectual and aesthetic richness, these novels raise nearly endless possibilities for discussion. The questions below will necessarily be limited and are meant to open several, but certainly not all, areas of inquiry for your reading group.


1. Which are the most intelligent and sympathetic voices in the novel? With whom do you most and least identify? Is Faulkner controlling your closeness to some characters and not others? How is this done, given the seemingly equal mode of presentation for all voices?

2. Even the reader of such an unusual book may be surprised to come upon Addie Bundren's narrative on page 169, if only because Addie has been dead since page 48. Why is Addie's narrative placed where it is, and what is the effect of hearing Addie's voice at this point in the book? Is this one of the ways in which Faulkner shows Addie's continued "life" in the minds and hearts of her family? How do the issues raised by Addie here relate to the book as a whole?

3. Faulkner allows certain characters--especially Darl and Vardaman--to express themselves in language and imagery that would be impossible, given their lack of education and experience in the world. Why does he break with the realistic representation of character in this way?

4. What makes Darl different from the other characters? Why is he able to describe Addie's death [p. 48] when he is not present? How is he able to intuit the fact of Dewey Dell's pregnancy? What does this uncanny visionary power mean, particularly in the context of what happens to Darl at the end of the novel? Darl has fought in World War I; why do you think Faulkner has chosen to include this information about him? What are the sources and meaning of his madness?

5. Anse Bundren is surely one of the most feckless characters in literature, yet he alone thrives in the midst of disaster. How does he manage to command the obedience and cooperation of his children? Why are other people so generous with him? He gets his new teeth at the end of the novel and he also gets a new wife. What is the secret of Anse's charm? How did he manage to make Addie marry him, when she is clearly more intelligent than he is?

6. Some critics have spoken of Cash as the novel's most gentle character, while others have felt that he is too rigid, too narrow-minded, to be
sympathetic. What does Cash's list of the thirteen reasons for beveling the edges of the coffin tell us about him? What does it tell us about his feeling for his mother? Does Cash's carefully reasoned response to Darl's imprisonment seem fair to you, or is it a betrayal of his brother?

7. Jewel is the result of Addie's affair with the evangelical preacher Whitfield (an aspect of the plot that bears comparison with Hawthorne's The Scarlet Letter). When we read Whitfield's section, we realize that Addie has again allied herself with a man who is not her equal. How would you characterize the preacher? What is the meaning of this passionate alliance, now repudiated by Whitfield? Does Jewel know who his father is?

8. What is your response to the section spoken by Vardaman, which states simply, "My mother is a fish"? What sort of psychological state or process does this declaration indicate? What are some of the ways in which Vardaman insists on keeping his mother alive, even as he struggles to understand that she is dead? In what other ways does the novel show characters wrestling with ideas of identity and embodiment?

9. This is a novel full of acts of love, not the least of which is the prolonged search in the river for Cash's tools. Consider some of the other
ways that love is expressed among the members of the family. What compels loyalty in this family? What are the ways in which that loyalty is betrayed? Which characters are most self-interested?

10. The saga of the Bundren family is participated in, and reflected upon, by many other characters. What does the involvement of Doctor Peabody, of Armstid, and of Cora and Vernon Tull say about the importance of community in country life? Are the characters in the town meant to provide a contrast with country people?

11. Does Faulkner deliberately make humor and the grotesque interdependent in this novel? What is the effect of such horrific details as Vardaman's accidental drilling of holes in his dead mother's face? Of Darl and Vardaman listening to the decaying body of Addie "speaking"? Of Vardaman's anxiety about the growing number of buzzards trying to get at the coffin? Of Cash's bloody broken leg, set in concrete and suppurating in the heat? Of Jewel's burnt flesh? Of the "cure" that Dewey Dell is tricked into?

12. In one of the novel's central passages, Addie meditates upon the distance between words and actions: "I would think how words go straight up in a thin line, quick and harmless, and how terribly doing goes along the earth, clinging to it, so that after a while the two lines are too far apart for the same person to straddle from one to the other; and that sin and love and fear are just sounds that people who never sinned nor loved nor feared have for what they never had and cannot have until they forget the words" [pp. 173-74]. What light does this passage shed upon the meaning of the novel? Aren't words necessary in order to give form to the story of the Bundrens? Or is Faulkner saying that words--his own chosen medium--are inadequate?

13. What does the novel reveal about the ways in which human beings deal with death, grieving, and letting go of our loved ones?

Comparing The Sound and the Fury, As I Lay Dying, andAbsalom, Absalom!

1. In all three of these novels the family is central to structure, plot, and meaning. It is the source of grief and identity as well as the locus of all individual psychic struggles. Do you see all of Faulkner's characters eternally trapped within their familial roles? How do the families differ in each of these novels, and how are they similar? How do the particularly important symbolic roles of the mother and the father differ from book to book?

2. Faulkner tries to make himself disappear in these works. Instead of using the traditional third-person narrator that most readers associate with the author, he directs a chorus of voices that intertwine, complement, and contradict one another. As readers, we must rely on what we learn from the characters themselves as to time, place, plot, and matters of cause and effect. Why do you think Faulkner prefers to make his characters speak "directly" to his readers? How does this technique affect your ability to believe in the worlds that exist in these novels? How would more direct intervention by an authorial voice change your experience?

3. In which of these works do you think Faulkner's style, his use of language, and his formal innovations are most finely tuned, most powerfully worked out? In which do you feel that his stylistic quirks are most annoying, most distracting?

4. All of these novels question our assumptions about time as regular, linear, sequential, predictable. What are some of the ways in which time is disrupted in these works?

5. The Compson family of The Sound and the Fury (1929) plays a central role in Absalom, Absalom! (1936) as well. Does Faulkner want readers of Absalom, Absalom! to assume that Quentin's involvement in the Sutpen story is one of the reasons for his suicide, which takes place three months later in The Sound and the Fury? Do you see a seamless characterization of Quentin and Mr. Compson in the two books?

6. Faulkner is interested in the causes and effects of extreme psychological pressures, as we see in Quentin and Benjy Compson, Henry and Thomas Sutpen, Rosa Coldfield, Vardaman and Darl Bundren, and many other characters in these novels. What are some of the forms that psychopathology takes in Faulkner's world?

7. Faulkner has often been accused of an extremely misogynistic representation of women. Consider Caddy Compson, Dilsey, Dewey Dell and Addie Bundren, Judith Sutpen, Rosa Coldfield, the wife of Charles St. Valery Bon, and other female characters in these three novels. How would you describe Faulkner's notion of the feminine, as compared with the masculine? Do you agree with the critic Irving Howe that "Faulkner's inability to achieve moral depth in his portraiture of young women clearly indicates a major failing as a novelist"?

8. Is the work of Faulkner necessarily different in its impact depending upon whether one is from the North or the South, whether one is black or white?