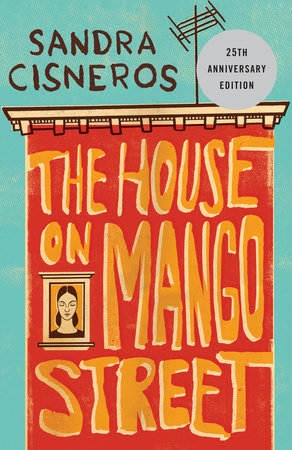 The House on Mango Street

“Sandra Cisneros is one of the most brilliant of today’s young writers. Her work is sensitive, alert, nuanceful . . . rich with music and picture.” –Gwendolyn Brooks

The House on Mango Street by Sandra Cisneros has been recognized by critics, professors, and readers alike as one of most important contributions to modern literature. This landmark story collection relates the triumphant coming-of-age of young Esperanza Cordero who finds her own voice and inner potential to overcome the impediments of poverty, gender, and her Chicana-American heritage. We hope the following introduction, discussion questions, suggested reading list, and author biography enhance your group’s reading of this exceptional work.


1. For discussion of the individual stories in THE HOUSE ON MANGO STREET
“The House on Mango Street”
In describing her house, or where she lives, what does Esperanza convey about her self-identity? How is the description of her house different from other information about her and her family’s identity, such as a name, an occupation, or a physical description? Why might Cisneros have chosen to open the book with a description of Esperanza’s house?

2. “Hairs”
What binds a family together in The House on Mango Street?

3. “My Name”
What does Esperanza find shameful or burdensome about her name? Why might Cisneros have chosen this name for her protagonist?

4. “Cathy Queen of Cats”
Why is Cathy’s family about to move, and what does this mean to Esperanza?

5. “Our Good Day”
At this stage of her life, what are Esperanza’s friendships based on, and what do her friends mean to her? Does she fit in with an older or younger crowd, and how does she feel about her place in the social hierarchy?

6. “Laughter”
What common traits does Esperanza share with Nenny, and how does she distinguish herself from Nenny?

7. “Gil’s Furniture Bought & Sold”
What makes Esperanza want the music box, and why is she ashamed of wanting it? How does her reaction to the box differ from Nenny’s reaction, and what does this difference tell the reader about the difference between the two girls? As in “Hairs” and “Laughter,” how does Esperanza separate herself from her family?

8. “Meme Ortiz”
How do the residents of Mango Street interact with one another?

9. “Louie, His Cousin & His Other Cousin”
How do Esperanza’s vivid similes such as those in this story (“the nose of that yellow Cadillac was all pleated like an alligator’s” [p. 25]) or those in “Laughter” (“ice cream bells’ giggle” or laughter “like a pile of dishes breaking” [p. 17]) set the tone throughout the novel? As Esperanza matures, does her use of simile change?

10. “Marin”
Does Marin dream of sex, romance or love, or all three? What are her goals? How does Esperanza position herself vis-á-vis Marin, and what is her opinion of Marin? Can she identify with Marin, and how might Marin be or not be a role model for Esperanza?

11. “Those Who Don’t”
How does Esperanza’s view of herself compare to her perception of how others view her?

12. “There Was an Old Woman She Had So Many Children She Didn’t Know What to Do”
Like “Rafaela Who Drinks Coconut & Papaya Juice on Tuesdays,” the title of this story is long and filled with detail. What do these and other titles in the book convey about the people and the life surrounding Esperanza? What kind of tone do these longer titles set for the story? What do they suggest about Esperanza’s character?

How are children regarded in Esperanza’s community?

13. “Alicia Who Sees Mice”
How has Esperanza’s relationships with Alicia changed since “Cathy Queen of Cats”?

How does Esperanza’s portrait of Alicia compare to her portrait of Marin? What do these portraits indicate about the differences between the two girls, and about Esperanza herself?

14. “Darius & the Clouds”
How does Esperanza keep her dreams alive? Does she hold any religious beliefs?

15. “And Some More”
What is the importance of names? How does Esperanza portray names in this story in comparison to her own name in “My Name”? How has her narrative voice changed from that earlier story?

16. “The Family of Little Feet”
To what degree is Esperanza aware of sex and sexuality? What does this indicate to the reader about her age?

17. “A Rice Sandwich”
What kind of person is Esperanza? What does the reader learn from this story about her strengths and weaknesses?

18. “Chanclas”
What stage in Esperanza’s life does this story capture, and how is this stage portrayed?

How has Esperanza’s voice changed from the previous stories “And Some More” and “The Family of Little Feet,” and in what ways is her voice still the same?

19. “Hips”
How does Esperanza distinguish herself from Nenny in this story? Does this distinction echo the one in “Gil’s Furniture Bought and Sold”?

How does Esperanza distinguish herself from the other girls she plays with, and has her relationship with them changed since the earlier stories such as “And Some More” or “Our Good Day”?

Has Esperanza’s comprehension of her own sexuality changed since “Marin,” and, if so, how?

21. “Papa Who Wakes Up Tired in the Dark”
What is Esperanza’s relationship with her father?

How does this story develop Esperanza’s character?

22. “Born Bad”
What clues does this story provide about the roles of women and men in Esperanza’s community?

How does this story, like “Papa Who Wakes Up Tired in the Dark,” evidence Esperanza’s character development?

23. “Elenita, Cards, Palm, Water”
Does the superstition expressed in this story conflict or coexist with any religious beliefs Esperanza may hold? With what tone does Esperanza describe her visit to Elenita?

24. “Geraldo No Last Name”
What is the significance of this being the last story in the book in which Marin is mentioned?

25. “Edna’s Ruthie”
What does Esperanza learn from Ruthie’s experience that helps her formulate goals?

26. “The Earl of Tennessee”
What does Esperanza learn from Earl that might help her formulate goals?

27. “Sire”
How has Esperanza’s awareness of her own sexuality evolved from “Hips” to this story? How have her imagination and her desires moved away from her negative sexual experience in “My First Job”?

28. “Four Skinny Trees”
What do the trees symbolize? What does Esperanza impose of her own character on the trees, and what does she take from the trees?

How do the trees compare to the clouds in “Darius & the Clouds”?

29. “No Speak English”
What does Esperanza tell us about her community’s attitude towards non-Mexican Americans? What about the image that the non-Latinos have of the Latinos? How do these views help or hinder Esperanza in the formulation of her own personal identity?

30. “Rafaela Who Drinks Coconut & Papaya Juice on Tuesdays”
What conflicting needs or desires of Esperanza’s does her description of Rafaela’s situation convey?

32. “Sally”
Compare the portrait of Sally to that of Marin in “Marin.” How is Esperanza’s relationship with Sally different?

33. “Minerva Writes Poems”
With what tone is Esperanza’s plaintive “There is nothing I can do” conveyed? [p. 85]

34. “Bums in the Attic”
Why does Esperanza wish to house “bums” in her attic?

35. “Beautiful & Cruel”
Does Esperanza reconcile the images of herself as “ugly” [p. 88] and “beautiful and cruel,” and what does each self-image imply about her future?

36. “A Smart Cookie”
What does Esperanza learn from her mother in this story, and how might their relationship be characterized?

37. “What Sally Said”
With what tone does Esperanza convey the violence Sally suffers? How does this tone convey her attitude toward abuse? Has Esperanza’s attitude changed from the earlier stories? Compare Esperanza’s family’s response toward this abuse with how the community reacts toward domestic violence and abuse in general.

38. “The Monkey Garden”
What is the nature of Sally’s and Esperanza’s friendship?

Can Esperanza ever recover what she lost in the monkey garden?

What does the monkey garden symbolize?

39. “Red Clowns”
What does Esperanza lose in “Red Clowns,” and how does it compare to her loss in “The Monkey Garden”?

What clues does Cisneros provide the reader about the precise nature of the assault on Esperanza?

40. “Linoleum Roses”
How and why has Esperanza’s tone toward Sally changed?

41. “The Three Sisters”
In what way do the Sisters provide the decisive turning point for Esperanza?

How does Esperanza’s community fit into her vision of her own future?

42. “Alicia & I Talking on Edna’s Steps”
What is the significance of the fact that the only lasting friendship Esperanza seems to have is with Alicia?

How does Cisneros utilize the recurring image of a house as a metaphor to tie her stories together thematically and structurally? Is the house a positive or negative image? What does it alternatively preserve or imprison within its walls, and what does it keep out? How is Esperanza’s house on Mango Street alike or different from the other houses portrayed in the stories? [See, e.g., “Meme Ortiz”]

44. “Mango Says Goodbye Sometimes”
Why must Mango say goodbye to Esperanza, and not vice versa? Why is Mango Street personified as a “she”?

Might Esperanza’s view of her own name have changed at this point, and, if so, how might she describe it?

For discussion of THE HOUSE ON MANGO STREET
1. From the beginning, Esperanza senses she does not want to end up inheriting her great-grandmother’s “place by the window . . . the way so many women sit their sadness on an elbow” [“My Name” p. 11]. How does Esperanza emotionally and physically separate herself from the other women: Marin, Sally, Rafaela, Minerva, or Ruthie? Will her solution in “Beautiful & Cruel” [“I am one who leaves the table like a man, without putting back the chair or picking up the plate” p. 89] be an effective one? How is her self-esteem formed, and how does it evolve over the course of the novel? What obstacles will Esperanza have to overcome, and what battles will she have to fight as she carves a future for herself?

2. Can or should The House on Mango Street be categorized as a coming-of-age novel, or is it more complex than that?

3. How do the children who inhabit Mango Street become the men and women portrayed in the novel? For instance, what circumstances explain how the Vargas children, Meme Ortiz, the girls Esperanza plays with, and her own sisters grow into the adults of Mango street such as Esperanza’s parents, the husbands and fathers in the neighborhood, the young wives, and the older single adults such as Earl and Ruthie? Is the children’s fate inevitable? How does Esperanza set an example for how they can shape their own futures?

4. If you have some knowledge of the history of Chicanos in America–how they arrived here and their place in society, how does The House on Mango Street reflect this history? How is the Chicanos’ treatment in society–i.e., their systematic exclusion–alike or different from that of other minority groups?

5. Given that the narrator is a young female, how does Cisneros make Esperanza and her stories accessible to older and/or male readers? Does Esperanza’s youth affect her telling of the story and her reliability as a narrator? Is there a universal message about one’s identity that transcends Esperanza’s individual experience?

6. Cisneros’s prose has been described as “poetic”* and “lyrical.”** What characteristics of the stories made these critics choose these descriptive words? What other words might be used to describe the selections in The House on Mango Street and why? Are the selections in The House on Mango Street most aptly labeled (a) stories, (b) sketches, (c) vignettes, or (d) poems, and what characteristics make them one or the other? How does Cisneros make the collection of sketches or stories work together as a book structurally and thematically?