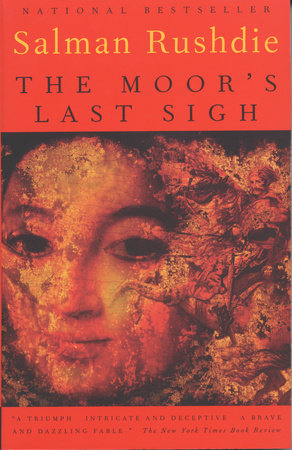 The questions, discussion topics, and author biography that follow are intended to enhance your group's reading of Salman Rushdie's The Moor's Last Sigh. We hope they will introduce a number of new angles from which to examine Rushdie's fabulous and philosophic vision of his native India, a panorama condensed within the story of one family and its last surviving member, Moraes Zogoiby, known as "the Moor."


1. Why does Rushdie use the device of a "double-quick" [p. 143] life for the Moor? What does the idea of such speed add to the novel? What is the significance of the Moor's deformed right hand to his character and function within the story?

2. Rushdie has stated that the idea of a portrait of a mother painted over because the father did not like it--the "lost image"--was the original inspiration for this novel. The image of the "palimpsest," a painting over which a second work has been superimposed, is central to The Moor's Last Sigh. How does the palimpsest become a metaphor for other of the novel's themes, i.e., love, God, the cultures of India?

3. Would you call Aurora a "good" mother? How directly is she responsible for the tragic lives of Ina, Minnie, Mynah, and the Moor? Why did Vasco Miranda paint Aurora without her children, and how does that image correspond with the picture of India painted by Rushdie?

4. Aurora's role as a mother is clearly central, but what about her role as wife and lover? What strategies does she use to deal with the men in her life, in particular Abraham, Vasco, and Raman Fielding? What do the notions of love, fidelity, and infidelity mean to her?

5. "Motherness--excuse me if I underline the point--is a big idea in India, maybe our biggest: the land as mother, the mother as land, as the firm ground beneath our feet" [p. 137]. In India, the mother is traditionally associated with the idea of the nation. How does Rushdie use the mythology of the mother goddess to depict his country? How did Indira Gandhi use it to propagandize her own national role, and what do you infer Rushdie's opinion of such mythmaking to be? How is Aurora made to represent the Indian nation itself in its maternal role?

6. What do the key historical events referred to by the narrator--the Spanish reconquista of Granada and the expulsion of the Moors, the founding of the spice trade between Europe and India, Portuguese colonial expansion, political events of twentieth-century India--have to do with the story of the Zogoiby and da Gama families? How do these references contribute to the story's impact?

7. "The family in the novel reflects a truth about Bombay society in the past thirty or so years," Rushdie has said. "Which is that the rich have got very much richer and the poor very much poorer." How is this economic disparity dealt with in the novel? How do the changing fortunes of the da Gama-Zogoiby clan reflect the economic condition of India? Can you find parallels with the changes that have taken place in American society over the past twenty years?

8. Do you think that Rushdie's elegiac representation of Bombay owes something to his exile from his native city? Where else in the novel does the theme of exile arise? Which characters might be considered, at one time or another, exiles?

9. How does Rushdie depict Hinduism? How does Raman Fielding's Mumbai Axis distort the tenets of Hinduism [pp. 296-301], and to what purpose? Is his political/cultural agenda pure fascism, and how closely does it resemble the most famous fascist regime of the century, Adolf Hitler's? Are the Moor's reasons for joining Fielding convincing to you? Does Rushdie imply that religious fundamentalism is essentially inimical to democracy? Do you believe that Rushdie implies a link between religion and madness? Between religion and disease?

11. Over and over Rushdie stresses, through his narrator the Moor, the beauty of plurality. Speaking of his family's history, the Moor asks, "Christians, Portuguese and Jews; Chinese tiles promoting godless views; pushy ladies, skirts-not-saris, Spanish shenanigans, Moorish crownsÉcan this really be India?" [p. 87]. How does the narrator represent, in his own person, India's pluralism and the pluralism of the entire world? How does the golden age of Granada, as imagined by Aurora in her paintings, comment upon the Zogoibys' story and the political history of the late twentieth century? Is Aurora's vision confirmed or denied by the novel's events?

12. How do the changes and developments in Aurora's painting style comment upon the nature and function of the artist? What about her evolving subject matter--how does it reflect the events within her family, and the larger events occurring in the nation and the world? How does Vasco Miranda's second-rate, kitsch art contradict, or compliment, Aurora's vision?

13. Uma Sarasvati's is presented by the author and by Aurora herself as a foil to Aurora. Does her character--and the more theoretical, "post-modern" nature of her art [pp. 261-2]--function as the opposite of Aurora's, or as its compliment? Does Uma exist as a character in her own right, or purely as an incarnation of evil? Is Abraham, too, an incarnation of evil?

14. What does Rushdie imply about the position and role of women through female characters such as Aurora, Belle, Uma, Carmen, and Nadia Wadia, and what, if anything, do these women have in common? How do they use the force of their characters to redress any cultural disadvantages they might have as women? How might one describe Rushdie's vision of the balance between the sexes?

15. In his opening pages, the Moor presents himself as a variation on Dante, "without benefit or need of Virgils, in what ought to be the middle pathway of my life" [p. 4], and the structure of the book is guided in part by that of The Divine Comedy. What other works of literature--fairy tales, religious texts, mythologies, epics, plays--help to give The Moor's Last Sigh its shape? How do their themes contribute to and enrich Rushdie's own? You might refer to the list of suggested reading below.

16. How does Rushdie use the Benengeli section of the novel to explore the theme of parasitism, and do you think that he intends Benengeli to represent the parasitism of the modern world? Rushdie equates Vasco Miranda with Bram Stoker's Dracula; with Helsing, the Larios sisters, and the Benengeli Parasites he makes other references to the Dracula tale. What does he achieve by making this comparison? What does the presence of Aoi U' within Vasco's nightmarish castle signify?

17. The Moor's Last Sigh can be seen as an argument for tolerance over dogmatism, educated scepticism over intractible zeal. How does Rushdie's imagined ideal of "Mooristan" encapsulate this interpretation? Do you believe that the novel delivers a message of pessimism or of optimism?