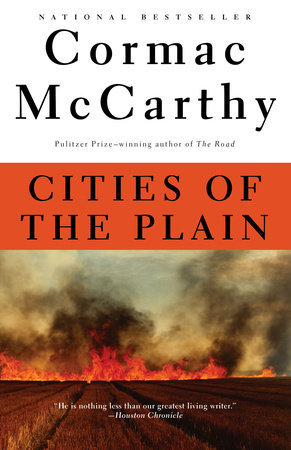 Cities of the Plain

The questions, author biography, and suggested reading list that follow are intended to enhance your group's reading and discussion of Cormac McCarthy's magnificent novel Cities of the Plain and his widely acclaimed Border Trilogy--a modern classic that began with All the Pretty Horses and The Crossing, and has been compared with the great works of Faulkner, Melville, and Hemingway. Although Cities of the Plain is the third volume in the Trilogy, it stands alone as a stunning work of literature in its own right. We hope that this guide will provide you with new ways of looking at, and talking about, the many themes and ideas that coalesce so beautifully in this darkly beautiful elegy for the American frontier.


1. For discussion of Cities of the Plain

2. What is the significance of the novel's title? What were the original "cities of the plain," and what do they correspond to within the novel?

3. What role do horses play in the book, and how are they characterized? How are the "souls" of horses seen to differ from those of men?

4. Cities of the Plain is in many respects a novel about the inevitability and tragedy of change. What events and situations has McCarthy used to dramatize that subject? "The war changed everything," says Billy. "I dont think people even know it yet" [p. 78]. What, precisely, has it changed? Which characters adjust to the changes, and which are unwilling or incapable of doing so?

5. What does the statement "beauty and loss are one" [p. 71] mean, and how does the novel illustrate this contention?

6. Of Magdalena, the old blind man says, "My belief is that she is at best a visitor. At best. She does not belong here. Among us" [p. 81]. What does he mean by this statement, and how is his premonition borne out? Can Magdalena's end be seen as inevitable, within the novel's particular world? What other predictions or auguries are offered in the novel? Do they add to the suspense or detract from it?

7. Which characters in the novel function as archetypes, and what do they represent? Do these archetypal characters keep them from being believable personalities?

8. Which of the characters have been affected by the Mexican Revolution, and in what ways has the Revolution changed their lives and helped to form their world? What are their feelings about the Revolution in retrospect?

9. How do you react to the many instances of violence in the novel? Do they seem gratuitous, or integral to the story? Is the graphic description of individual acts of violence included for mere titillation or shock value, or is it necessary in making the reader truly understand and come to terms with the novel's time and setting?

10. In spite of the widespread violence in the Border country, it is also a place in which people are unusually hospitable, at least by modern urban standards. Archer describes his travels through Mexico after the Revolution: "They didnt have no reason to be hospitable to anybody. Least of all a gringo kid. That plateful of beans they set in front of you was hard come by. But I was never turned away. Not a time" [p. 90]. What other examples of unusual hospitality can you find in the book? Is this hospitality connected in some way with the everyday violence that affects these people's lives?

11. In Cities of the Plain Mexico is characterized as female, the United States as male. What is the reason for this dichotomy, and how has McCarthy achieved the effect? In what ways is the southwestern United States qualitatively different from Mexico, just across the border? What does Mac mean when he reflects that, "In Mexico there is no God. Just her [the Virgin]" [p. 116]?

12. Billy says to John Grady, "You know you been actin peculiar since you had that wreck?" [p. 121] Is that true? If so, what happened during the wreck to alter John Grady's behavior or change his thinking?

13. What does the blind man mean when he tells John Grady, "Your love has no friends. You think that it does but it does not. None. Perhaps not even God" [p. 199]? Why does it have no friends? Why is it impossible that John Grady and Magdalena's love should ever succeed? Is John Grady aware of the impossibility, or does his love blind him to reality?

14. Billy says that Mexico is "another world. Everbody I ever knew that ever went back was goin after somethin" [p. 218]. What is John Grady going after? To what extent is he aware of his needs and his motivations? Eduardo says that John Grady is seeking death. Is he right? Why would John Grady choose death over life? Why is Billy different, opting for life, however diminished?

15. Who is the mysterious stranger that Billy, in old age, meets on the highway? What is the significance of the long story he tells, and what relation does it bear to Billy's life?

16. "In everything that he'd ever thought about the world and about his life in it he'd been wrong" [p. 265], Billy reflects as an old man. Which of his opinions were proved wrong? How does the world differ from the one he had thought he knew, and in what ways is old Billy different from young Billy?

17. Who is the real hero of this story: John Grady or Billy? Does the author play with conventional notions of what makes a hero? How do these young men fit into the chivalric tradition, and which earlier literary heroes do each of them resemble? For discussion of The Border Trilogy

18. The Border Trilogy is in many ways a work about the inevitability and tragedy of change. What events in the novels, both personal and historical, dramatize this theme? What has changed or is in the process of changing? Which characters adjust to these changes, and which are unable or unwilling to do so?

19. All three of the novels in the Border Trilogy are extremely violent. At a time when graphic and gratuitous descriptions of mayhem are standard in much popular fiction for purposes of mere shock and titillation, has McCarthy succeeded in restoring to violence its ancient qualities of pity and terror? How has he managed this?

20. There are many different Border crossings in the trilogy, and each crossing is in itself something in the nature of a quest. What, in each case, are the travelers seeking? Do they attain their goal? What do all the crossings have in common?

21. In what ways do John Grady Cole and Boyd Parham resemble one another? How is Billy different from both of them? Does he ever fully understand them? What ways does he find of dealing with them?

22. Who is the real hero of the trilogy, John Grady or Billy? Does the author play with conventional ideas of what makes a hero? How do these young men fit into the chivalric tradition, and which earlier literary heroes do each of them resemble?

23. The cowboys or vaqueros abide by an age-old moral code. Is this moral code viable in the new world in which they find themselves? Is it merely anachronistic, or are its values still alive and essential? What moral code exists in the modern world, and how does it correspond to the older one?

24. The culture on both sides of the Border as described in this trilogy is essentially a masculine one, some would say a macho one. Does this fact alienate you from the world described, or is the machismo an important, even a vital and necessary, part of a noble ethos?

25. How does the Border Trilogy exploit, and play against, the classic myth of the American West? What is its place within the tradition of the Western, alongside prototypes like The Virginian? Does it uphold, or subvert, the traditional values of the genre?

26. Who in the trilogy can be seen as archetypes, rather than as fully-fleshed characters? Which characters succeed both as personalities and as archetypes? Why has the author chosen to rely so heavily on archetypal figures to tell his story?

27. How has the history of the Border region, from the Alamo to the Mexican Revolution to the nuclear tests at Alamogordo, affected the lives of the Border Trilogy's characters and helped to form their world? How do historical events and tragedies continue to resonate in the narrative's present?

28. What well-known myths, legends and fairy tales can you discern within the Border Trilogy? Does the fact that it is a very "literary" piece of work distance you from it, or does it serve to draw you in more completely? Suggestions for further reading Paul Bowles, Collected Stories, The Sheltering Sky; William Burroughs, The Place of Dead Roads; Joseph Campbell, The Hero With a Thousand Faces; Joseph Conrad, Lord Jim, Nostromo, Victory; William Faulkner, The Sound and the Fury, Light in August, The Reivers; Ford Madox Ford, The Good Soldier; Jim Harrison, Legends of the Fall; Ernest Hemingway, For Whom the Bell Tolls, The Old Man and the Sea; James Jones, From Here to Eternity; Norman Mailer, The Naked and the Dead; Larry McMurtry, The Last Picture Show, Lonesome Dove; Susan Minot, Evening; Michael Ondaatje, The English Patient; Herman Melville, Moby-Dick, Billy Budd, Foretopman; B. Traven, The Treasure of the Sierra Madre; Mark Twain, The Adventures of Huckleberry Finn; Owen Wister, The Virginian. And for background material on McCarthy, see Perspectives on Cormac McCarthy, edited by Edwin T. Arnold and Dianne C. Luce.