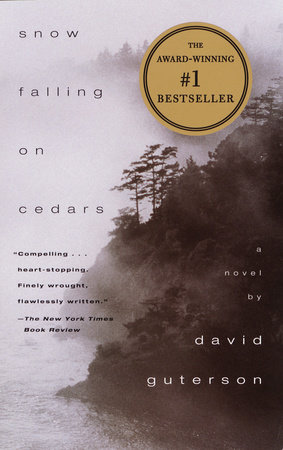 The discussion topics, author biography, historical material, and bibliography that follow are meant to enhance your group's reading of David Guterson's Snow Falling on Cedars. We hope that they will provide you with new ways of looking at--and talking about--a novel that has been widely praised for its eloquent dramatization of themes of love, justice, racism, community, and conscience. These ideas arise organically from the book's suspenseful story of a murder trial, its evocation of a lost love, and its brooding, poetically nuanced portraits of character and place.


1. Snow Falling on Cedars opens in the middle of Kabuo Miyamoto's trial. It will be pages before we learn the crime of which he has been accused or the nature of the evidence against him. What effect does the author create by withholding this information and introducing it in the form of flashbacks? Where else in the narrative are critical revelations postponed? How is this novel's past related to its fictional present?

2. The trial functions both as this novel's narrative frame and as its governing metaphor. As we follow it, we are compelled to ask larger questions about the nature of truth, guilt, and responsibility. How does the author interweave these two functions? Which characters are aware that what is at stake is more than one man's guilt?

3. When the trial begins, San Piedro is in the midst of a snowstorm, which continues throughout its course. What role does snow play--both literally and metaphorically--in the book? Pay particular attention to the way in which snow blurs, freezes, isolates, and immobilizes, even as it holds out the promise of an "impossible winter purity" [p. 8]. How does nature shape this novel?

4. Guterson divides his island setting into four zones: the town of Amity Harbor; the sea; the strawberry fields; and the cedar forest. What actions take place in these different zones? Which characters are associated with them? How does the author establish a different mood for each setting?

5. In his first description of Carl Heine [pp. 14-16], Guterson imparts a fair amount of what is seemingly background information: We learn about his mother's sale of the family strawberry farm; about Carl's naval service in World War II; and about his reticence. We learn that Carl is considered "a good man." How do these facts become crucial later on, as mechanisms of plot, as revelations of the dead man's character, and as clues to San Piedro's collective mores? Where else does the author impart critical information in a casual manner, often "camouflaging" it amid material that will turn out to have no further significance? What does this method suggest about the novel's sense of the meaningful--about the value it assigns to things that might be considered random or irrelevant?

6. When Carl's body is dredged from the water, the sheriff has to remind himself that what he is seeing is a human being. While performing the autopsy, however, Horace Whaley forces himself to think of Carl as "the deceased...a bag of guts, a sack of parts" [p. 54]. Where else in Snow Falling on Cedars are people depersonalized--detached from their identities--either deliberately or inadvertently? What role does depersonalization play within the novel's larger scheme?

7. What material evidence does the prosecution produce in arguing Kabuo's guilt? Did these bits of information immediately provoke the investigators' suspicions, or only reinforce their preexisting misgivings about Carl's death? Why might they have been so quick to attribute Carl's death to foul play? How does the entire notion of a murder trial--in which facts are interpreted differently by opposing attorneys--fit into this book's thematic structure?

8. Ishmael suffers from feelings of ambivalence about his home and a cold-blooded detachment from his neighbors. Are we meant to attribute these to the loss of his arm or to other events in his past? How is Ishmael's sense of estrangement mirrored in Hatsue, who as a teenager rebels against her mother's values and at one point declares, "I don't want to be Japanese" [p. 201]? To what extent do Kabuo and Carl suffer from similar feelings? How does this condition of transcendental homelessness serve both to unite and to isolate the novel's characters?

9. What significance do you ascribe to Ishmael's name? What does Guterson's protagonist have in common with the narrator of Moby-Dick, another story of the sea?

10. What role has the San Piedro Review played in the life and times of its community? How has Ishmael's stewardship of the paper differed from his father's? In what ways does he resemble his father--of whom his widow says, "He loved humankind dearly and with all his heart, but he disliked most human beings" [p. 36]? What actions of Ishmael's may be said to parallel the older man's?

11. Ishmael's experience in World War II has cost him an arm. In that same war Horace Whaley, the county coroner, lost his sense of effectiveness, when so many of the men he was supposed to care for died. How has the war affected other characters in this book, both those who served and those who stayed home?

12. Guterson tells us that "on San Piedro the silent-toiling, autonomous gill-netter became the collective image of the good man" [p. 38]. Thus, Carl's death comes to signify the death of the island's ideal citizen: he represents a delayed casualty of the war in which so many other fine young men were killed. Yet how productive does the ideal of silent individualism turn out to be? To what extent is Carl a casualty of his self-sufficiency? What other characters in this novel adhere to a code of solitude?

13. Kabuo and Hatsue also possess--and are at times driven by--certain values. As a young girl, Hatsue is taught the importance of cultivating stillness and composure in order "to seek union with the Greater Life" [p. 83]. Kabuo's father imparts to him the martial codes of his ancestors. How do these values determine their behavior, and particularly their responses to internment, war, and imprisonment? How do they clash with the values of the Anglo community, even as they sometimes resemble them?

14. Racism is a persistent theme in this novel. It is responsible for the internment of Kabuo, Hatsue, and their families, for Kabuo's loss of his land, and perhaps for his indictment for murder. In what ways do the book's Japanese characters respond to the hostility of their white neighbors? How does bigotry manifest itself in the thoughts and behavior of characters like Etta Heine--whose racism is keenly ironic in view of her German origins--Art Moran, and Ishmael himself? Are we meant to see these characters as typical of their place and time?

15. Although almost all the novel's white characters are guilty of racism, only one of them--Etta Heine--emerges unsympathetically. How do her values and motives differ from those of other San Piedrans? How is her hostility to the Japanese related to her distaste for farming? To what extent are Guterson's characters defined by their feelings for their natural environment?

16. Ishmael's adolescent romance with Hatsue has been the defining fact of his life, its loss even more wounding than the loss of his arm. Yet when Hatsue first remembers Ishmael, it is only as a "boy" [p. 86] and her recollection of their first kiss is immediately supplanted by the memory of her wedding night with Kabuo. How else does Guterson contrast Hatsue's feelings for these two men? (Note that Hatsue's feelings for both Ishmael and her husband become clear in the course of making love.) What does the disparity between Hatsue's memories and Ishmael's suggest about the nature of love? Where else in this novel do different characters perceive the same events in radically different ways--and with what consequences?

17. In choosing Kabuo, Hatsue acknowledges "the truth of her private nature" [p. 89]. That choice implies a paradox. For, if Kabuo is a fellow nisei, he is also rooted in the American earth of San Piedro's strawberry fields. How is this doubleness--between Japanese and American--expressed elsewhere in Snow Falling on Cedars?

18. Ishmael's attraction to Hatsue is closely connected to a yearning for transcendence, as indicated by their early conversation about the ocean. Ishmael says, "It goes forever," while Hatsue insists, "It ends somewhere" [p. 97]. Typically, it is Ishmael who wishes to dissolve boundaries, Hatsue who keeps reasserting them, as when she gently withholds the embrace that Ishmael so desperately wants. What limits might Ishmael wish to transcend, even as a boy? Does he ever manage to do so? Does Snow Falling on Cedars hold the promise of transcendence for its characters or at best offer them a reconciliation with their limits?

19. One way that Guterson interweaves his novel's multiple narrative strands is through the use of parallelism: Ishmael spies on Hatsue; so does Kabuo. The two men are similarly haunted by memories of the war. Both Kabuo and Carl Heine turn out to be dissatisfied fishermen who yearn to return to farming. Where else in this novel does the author employ this method, and to what effect?

20. What is the significance of the novel's last sentence: "Accident ruled every corner of the universe except the chambers of the human heart"?