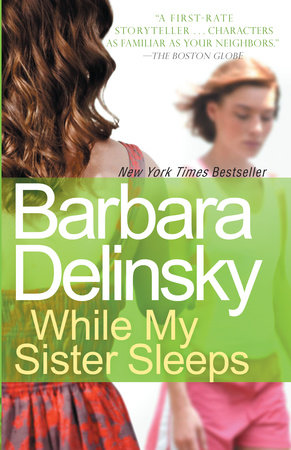 While My Sister Sleeps

"Delinsky is a first-rate storyteller who creates believable, sympathetic characters who seem as familiar as your neighbors." —The Boston Globe

The introduction, questions, and suggestions for further reading that follow are designed to enhance your group's discussion of Barbara Delinsky's deeply moving novel While My Sister Sleeps. Raising provocative questions about family ties, repercussions of the past, and the toughest choices a parent could ever have to make, While My Sister Sleeps is a novel that will give you much to discuss.


1. How would you characterize the relationship among Robin, Molly, and Chris? Does Chris play a different role because he is a son? How does the Snow family compare to yours?

2. How is Molly transformed during the week after Robin's heart attack? What does Molly discover about herself and about the range of emotions she and her sister evoked in each other?

3. What is at the root of Kathryn's controlling behavior? How did her past, including her experience with her own parents and her art teacher, influence her personality? Who has more power in the marriage: Kathryn or Charlie?

5. What do Charlie's religious beliefs say about him and about the differences between him and the other members of his family?

6. As parents, what family memories do Chris and Erin create for their daughter, Chloe? How does their approach to parenting compare to Charlie and Kathryn's?

7. How does Alexis's illness shape the novel's storyline? What parallels exist between her situation and Kathryn's state of denial?

8. How much is Nick entitled to know, as a reporter and as a friend of Robin's? Is Robin entitled to less privacy because she is a public figure, with a wide circle of fans who are concerned about her?

9. What determines whether Liz will be a threat to Chris's marriage? How is Liz's role in the novel different from Peter's? How much does the past matter in a marriage, especially events that took place before the wedding?

10. What was it like to read Robin's journal after hearing so much about her? Captured in her own words, how does her life compare to other people's impressions of her?

11. What does Kathryn have to do in order to let go? What does it take to help her see the truth about her circumstances—and Robin's?

12. How is Marjorie's family affected by her dementia? What do the connections among Marjorie, Kathryn, and Molly show us about mothers and daughters? What traits, emotional and otherwise, are passed from one generation to the next in While My Sister Sleeps?

14. Ultimately, what legacy does Robin leave for her family? What intangible gifts does Molly inherit from her sister?

15. Discuss the medical issues raised by Robin's story. Is it unethical to keep a child from knowing the identity of his or her biological parents? How would you have handled the end-of-life-care questions raised by Robin's heart attack?