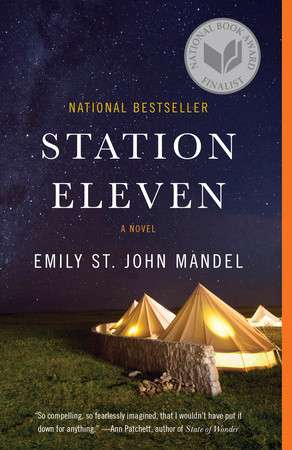 An audacious, darkly glittering novel about art, fame, and ambition set in the eerie days of civilization’s collapse, from the author of three highly acclaimed previous novels.

One snowy night a famous Hollywood actor slumps over and dies onstage during a production of King Lear. Hours later, the world as we know it begins to dissolve. Moving back and forth in time—from the actor’s early days as a film star to fifteen years in the future, when a theater troupe known as the Traveling Symphony roams the wasteland of what remains—this suspenseful, elegiac, spellbinding novel charts the strange twists of fate that connect five people: the actor, the man who tried to save him, the actor’s first wife, his oldest friend, and a young actress with the Traveling Symphony, caught in the crosshairs of a dangerous self-proclaimed prophet. Sometimes terrifying, sometimes tender, Station Eleven tells a story about the relationships that sustain us, the ephemeral nature of fame, and the beauty of the world as we know it.

1. Now that you’ve read the entire novel, go back and reread the passage by Czeslaw Milosz that serves as an epigraph. What does it mean? Why did Mandel choose it to introduce Station Eleven?

8. Certain items turn up again and again, for instance the comic books and the paperweight—things Arthur gave away before he died, because he didn’t want any more possessions. And Clark’s Museum of Civilization turns what we think of as mundane belongings into totems worthy of study. What point is Mandel making?

Emily St. John Mandel was born in British Columbia, Canada. She is the author of three previous novels—Last Night in Montreal, The Singer’s Gun, and The Lola Quartet—all of which were Indie Next picks. She is a staff writer for The Millions, and her work has appeared in numerous anthologies, including The Best American Mystery Stories 2013 and Venice Noir. She lives in New York City with her husband.

Oryx and Crake by Margaret Atwood; The Passage by Justin Cronin; The Dog Stars by Peter Heller; The Stand by Stephen King; The Road by Cormac McCarthy; Cloud Atlas by David Mitchell; King Lear by William Shakespeare; A Thousand Acres by Jane Smiley