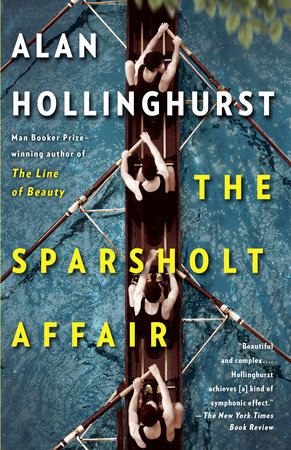 The questions, discussion topics, and other material that follow are intended to enhance your group’s conversation about Alan Hollinghurst’s The Sparsholt Affair, a multigenerational novel that explores the relationships between fathers and sons, art and power, and the legacies we inherit and create for ourselves, set against the backdrop of great cultural change in England from World War II to the present.


1. How does the urgency of the war in the first section of the novel amplify the tensions between the boys at Oxford, who are naturally grappling with questions of identity and purpose at this stage of their lives? Discuss in particular the role of the blackouts.

2. What does the war do to the book’s collective memory, including how we see it from Lucy’s point of view at the end?

3. Artists are put on a high pedestal throughout the novel. What makes them interesting to outsiders—for example, the appeal of Victor Dax—and how does the novel suggest a more complicated identity for these creators?

4. Freddie’s sexuality is a gray area throughout the book, from when Freddie first meets David Sparsholt until his death. How important is it to know if he is gay or straight, to the other characters (including himself) as well as to the reader’s experience on the whole?

5. How does the frame of Freddie’s “memoir” in the first part of the book influence what comes after? What does Freddie’s character, in all the ways we see him, explore in terms of the concept of “writing the self”—vis-à-vis the other writers’ roles in the book, and also stepping back to consider this book’s writing?

6. Discuss the various taboos that come up in the book, and which characters are most affected by falling into a taboo category. How does the historical period shape an individual’s impression of others and oneself? Compare, for instance, the dynamics between Evert and David and Una and Francesca.

7. The male body and gaze play an important role in the characters’ relationships with one another. How are certain men more or less “seen” by other men because of their looks or artistic purview? What does a character’s body say about them, perhaps more than anything else? For instance, how does David’s idealized form inform how the other men and women in the book treat him and affect the reader’s compassion toward him?

8. What are the different meanings of “the Sparsholt affair”? Why do you think the author chose to make the phrase the title of the book?

9. Fathers and sons are intimately connected in this male-dominated society, even in non-biological contexts. What pairings stuck out to you as being the most complex, damaging, or nurturing? How does Johnny become a fulcrum for all these fathers and sons as he comes of age and into parenthood?

10. What does Johnny’s situation with Lucy, and his own falling out with David, show about the changing nature of families during the novel’s time period? What, in your view, makes this father-daughter relationship unique?

11. Discuss the main female characters in the novel—Jill, Connie, Una, Francesca, Lucy, for example—and how they are situated in relationship to the men around them. Who seems to have more control, and how do the times influence these gender dynamics? What do female power and voice look like compared with male power and voice?

12. It could be argued that David Sparsholt is the central character of the book—do you agree or disagree? How broadly can you interpret the scandal that surrounds him to include the nexus of characters in his life? Who would you say is the hero, if there is one?

13. Secrecy drives much of the narrative and character development in the book—what people do and do not know about one another and how speculation can have a distorting ripple effect across time. What would you identify as the biggest secret in the novel, and who seems to be affected the most by it?

14. Many of the main characters at the beginning of the book have died by the end. How does this arc of life underscore the march of time overall? Do standards of beauty, artistic worth, and love change as a result of aging, culture, or both?

15. To what degree do legacy and reputation impact characters’ decisions, especially Johnny’s? Do you sense that he understood how the past may have influenced his present or future, and, if so, when?

16. What do the book’s final lines suggest about the power of art, including as an alternative to human mortality?