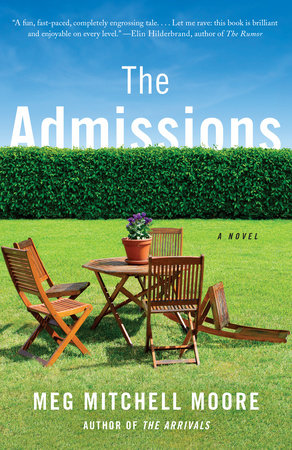 This guide is intended to support your discussion of The Admissions, Meg Mitchell Moore’s delightfully screwball novel about a modern California family struggling to stay afloat during their eldest daughter’s senior year of high school.


1.      From the prologue of the book we learn that someone is on the Golden Gate Bridge. We don’t know who, or why, until the end of the book. Did your notion of who might be on the bridge change throughout the course of the novel? Did you guess right?

2.      A big part of the novel deals with the pressure on Angela Hawthorne during the fall of her senior year of high school at a rigorous public school in Marin County, California. Who is responsible for this pressure—is it Angela herself, her parents, or society at large?

3.      While thinking of a gold rush town that was repeatedly destroyed by fire and then rebuilt, Nora muses, “The capacity [California] had for rising from the flames was truly mind-boggling.”  How is that statement borne out or disproven during the course of the novel? How do Nora and Gabe’s own upbringings influence their new life in California, and the choices they make?

4.      During an argument with her father Angela challenges Gabe by saying, “Try living in my shoes and see if you can do it. Do my homework for a week…Go to these practices, listen to the kids at school talk about their GPAs and their class ranks…” Do you think that the parents of today’s gifted high school students could handle their children’s schedules and workloads? If you’ve been out of school for a while, how much do you think the expectations on high school students have changed?

5.      The title of the book has more than one meaning—while college admissions represent a major concern, there is a certain amount of admitting of secrets that occurs as well. Whose secret is the most devastating, personally and/or professionally? Are there any secrets that remain by the novel’s end? At one point Nora says, “Some people say it’s normal for spouses to have at least one secret from each other.” Do you think that’s true?

6.      When Angela meets an admissions officer from Harvard he tells her, “Everybody in your generation, you and all of your peers, you all think you’re special. But how can every single one of you be special? It’s impossible.” Do you agree with his assessment of today’s high-school-aged youth?

7.      Abby Freeman is instrumental in forcing one character to confront a secret, but does she play another role as well? At one point, Gabe remarks, “It scared him, to think that in just five years Angela would be the same age as this girl now, with a job and maybe even a professional-looking blouse.” Do you think Gabe’s interactions with Abby inform any decisions he makes later?

8.      The novel is told in rotating points of view, with everyone but the youngest Hawthorne daughter getting the opportunity to narrate. What is the purpose of this device, and is it an effective way to tell this family’s story? What purpose do Nora’s letters to Marianne serve in telling their story?

9.      Do you agree with the decisions the Hawthornes make by the end of the novel? Why or why not?

10.   Do you think that the author meant this book to serve as a cautionary tale, and, if so, for whom?

11.   If you imagine the Hawthorne family a few years in the future, what lessons do you think they will have learned or failed to learn from their fateful fall?