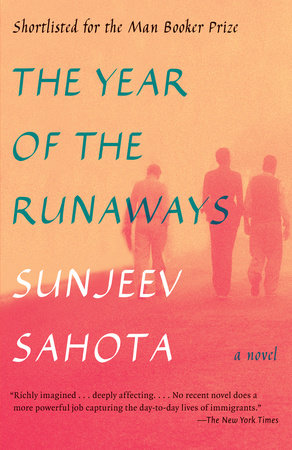 The Year of the Runaways

The questions, discussion topics, and reading list that follow are intended to enhance your reading group’s discussion of The Year of the Runaways, Sunjeev Sahota’s unforgettable epic about the indomitable nature of the human spirit and how the most challenging moments in life define us in indelible ways.


1. Woven throughout the narrative of The Year of the Runaways is a complex exploration of class and economics. Discuss the rigidity of the class system in India. How does social class prohibit or grant economic opportunities for the characters in the novel? Does social class carry the same significance in England as it does in India?

2. What role does the gurdwara play in the community? Does it have different functions in India than it does in England? Which characters rely on it most heavily?

3. A sense of anxiety pervades throughout The Year of the Runaways, particularly regarding the prospect of raids. Discuss how this anxiety manifests for various characters. Who is most cautious in their day-­to-­day life?

4. Discuss Narinder’s personal evolution over the course of the novel. What is the catalyst for her rebellion? Which characters help to challenge her ideas about the roles that women can fulfill?

5. Of the three male protagonists, Randeep’s entrée into England is seemingly the least dangerous method. Discuss his experience getting to England, and his expectations for his relationship with Narinder. What hopes does he have for their marriage?

6. When Randeep and Avtar arrive in England, they initially stay in Randeep’s aunt’s home. Discuss the interaction between Avtar and Randeep’s cousin Aki on page 196. What does their conversation reveal about biases held towards immigrants? About family structure in Indian communities? Gender roles?

7. Discuss Avtar’s relationship with Dr. Cheema over the course of the novel. How does their first meeting set the tone for the rest of their interactions? How does Cheema’s own search for identity coincide with Avtar’s journey towards citizenship?

8. Tochi’s class, or caste, identity as a chamaar follows him throughout the novel. How are chamaars discussed by other characters in the novel? How is Tochi’s careful crafting of an ambiguous “immigrant identity” a means of survival? Discuss the incident with the matchmaking aunty. What does this assert about the ugly and pervasive face of classism?

9. Early in the novel, out of obligation to Randeep, Avtar chooses Avtar chooses to turn down the position that Dr. Cheema secured for him. Discuss the concept of familial obligation over personal freedom. How does this echo throughout the novel? Which characters feel that most acutely?

10. How does food serve as a form of comfort throughout The Year of the Runaways? Discuss how Tochi and Narinder’s relationship is deepened through the act of cooking.

11. On page 289, Narinder asks: “Did these women not understand that duty, that obligation, could be a form of love?” Discuss how Narinder’s understanding of her duties and obligations changes over the course of the novel. How does her faith cause familial tension? How does her relationship with Savraj expand her worldview?

12. How would you characterize Avtar and Randeep’s relationship? How much of their bond is attributed to Avtar’s obligation to Randeep’s sister? Discuss the scene wherein Avtar takes a job, leaving Randeep behind. How does the desperation for jobs strain their relationship? Other relationships in the novel?

13. Narinder and Tochi slowly forge a bond out of mutual respect and trust, and eventually realize that these feelings are that of love. Given the depth of their feelings for each other, why do you think she turns him down? Is it out of guilt? Obligation?

14. The Year of the Runaways is a novel that celebrates the incredible tenacity of the human spirit. Where does each character find hope in the most dire circumstances? What comforts them, if anything?

15. Discuss the epilogue of the novel. How would you describe the fate of each character? Which character, if any, has found happiness?