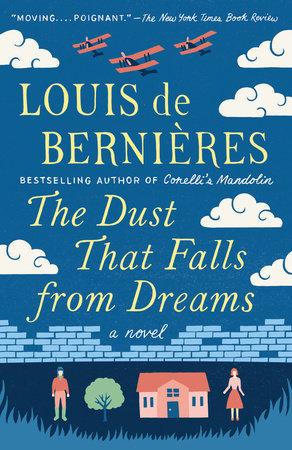 The Dust That Falls from Dreams

The discussion questions and reading list that follow are intended to enhance your reading group’s conversation of The Dust That Falls from Dreams, the new novel by Louis de Bernières.


1. The dedication of the novel mentions that this book is based on the author’s family. Does this affect your reading of the story? Why or why not?

2. Discuss the title and its relevance to the novel as a whole.

3. Why do you think has the author chosen brief, episodic chapters with various voices and letters rather than one continuous chronological story? Does this make the novel a more compelling story?

4. Daniel writes: “I don’t know about you, but I think there are two ways to have come through the war. You can either let it haunt you and torment you . . . or you can be thankful for what beauty and honor came through intact and are steadily growing now that the fighting’s over” (p. 555). How do the characters’ various experiences during WWI color the rest of their lives? Who is crippled/traumatized by the war? Who is able to move on? Which characters are the most adaptable?

5. Discuss the ideas of nobility as opposed to meritocracy in the novel. How does the war move England away from its strict class system of noble/landed families holding the wealth to a class system based more on merit and intelligence and adaptability?

6. Describe the novel’s examination of the domestic upheavals that arrived after the war, including the rise of feminism, the decline of patriotism, the questioning of religion, and the reorientation of class structures.

7. How does this book compare with or compliment episodes of Downton Abbey (if you have watched that PBS Masterpiece series)?

8. The author gives vivid pictures of warfare in the trenches and in the air through Ash’s and Daniel’s stories. What type of research do you think he did to be able to paint such reconstructions of air warfare and life in the trenches?

9. How does wartime hospital life affect and change Rosie? Or does it? How is the experience different for Sophie?

10. How does the war and its legacy differ for males and females?

11. What role does Archie serve in the novel? How is he a foil to Daniel? What side of English twentieth century colonialism/exploration does he represent?

12. Compare and contrast the Reverend Captain Fairhead and the medium. How do their discussions add to your knowledge of the religious and spiritual atmosphere of England after the war?

13. Why does Rosie become even more religious after the war? “In her room she frequently unwrapped her Madonna and child and looked into that painted face for some hint of advice or direction” (p. 360). Do you think this reaction is unusual or typical of wartime feelings?

14. Mrs. McCosh finds solace in music. Between poetry and religion, which offers Rosie more relief and peace? What other mediums do people use to help them through tumultuous times?

15. How is the setting, first of the English countryside and then the Sri Lankan highlands, important in this novel? Could this story take place anywhere else in the world? How and how not? How do the events of the novel this compare and contrast with what was happening in the United States at this time?

16. Describe the role of fathers and mothers in the novel. Compare the two major mother figures in the book, Rosie’s mother and Daniel’s mother. How are they different? What is ultimately important to both of them? How are Rosie and Daniel as parents, in light or in spite of this?

17. What does Hamilton McCosh’s conduct as a landowner, inventor, and businessman say about his character? How does it change after the war?

18. Why does Rosie marry Daniel despite her still being in love with Ash?

19. What is the turning point for Rosie when she finally accepts and loves Daniel? How is she finally able to move on from tragedy to love? What do you think the future holds for Daniel and Rosie, both in their relationship and in their lives? How do you imagine their story playing out?

20. Describe the subtle use of humor in the novel. How does the author use it to point out the characters’ flaws? To lift the mood of the novel? To contrast with the horror of wartime?

21. Discuss the four sisters and their personalities and relationships with each other and with the world at large. Do they remind you of the four sisters in Louisa May Alcott’s Little Women? In what ways are they similar/different?

22. How does the relationship between Christabel and Gaskell play into the story? Why do you think the author included the character of Gaskell?

23. What is Ottilie’s role in the novel? Why do you think the author chose to leave her alone at the end?

24. De Bernières constructs a uniquely complex series of relationships in the novel. Who and what surprised you most in the story? Why did you find it surprising and what did you expect instead?

25. What do you think of the ending of the novel?