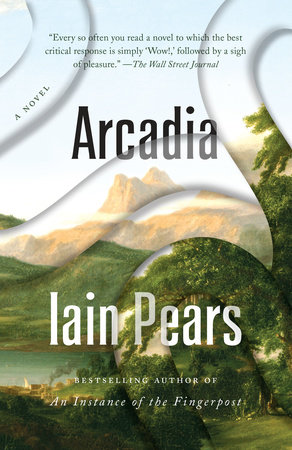 The discussion questions, and suggested reading that follow are designed to enhance your group’s discussion of Arcadia, a mind-­twisting epic novel by Iain Pears.


1. Where does the title of the book come from? What is Arcadia, and why do you think the author chose this title for the novel? How might the title serve as a clue that suggests or otherwise echoes the major themes of the text?

2. What is Anterwold? Why does Henry Lytten write about this place, and what characteristics does he give it? What are some of his major influences in the creation of this world?

3. Consider what the book has to say about the subject of history and our past. Angela is trying to find out how easy—­or difficult—­it is to change the course of history. What does she determine? What does the book suggest about the relationship between the past and the future?

4. How many points of view are represented in the book? Who are the narrators of the stories contained within the novel, and how does the shifting perspective affect your interpretation of the story? Does any one point of view seem to stand out from all the rest?

5. Consider the theme of morality. Can readers easily identify who is “good” and who is “bad”? What do the intentions and motives of certain characters—­Oldmanter, or Angela, or Alex Chang, for instance—­reveal to us about their nature? Does the book present a particular vision of morality? Discuss.

6. Evaluate setting. What settings does Pears employ in Arcadia? Does any one setting stand out from all the rest? What themes does each setting help to reveal or reinforce?

7. Consider utopia and dystopia as a motif in the book. How would the various characters in Arcadia define utopia? Would their definitions be consistent with one another? Which character or group of characters do you think is correct about creating a society that “works,” as Henry Lytten would say?

8. Evaluate the theme of time. How is time represented or defined within the book, and what does this indicate about the relationship between past and present as well as cause and effect? Why does Angela believe that elderly people with dementia or Alzheimer’s are more in tune with the true nature of time?

9. Consider representations of status or social class in the book. How is status or class determined amongst the different groups of characters? What allows a character to achieve a high rank in each time and place? Does there seem to be social mobility in any of these places? If so, what allows or causes characters to shift positions?

10. Examine the theme of loyalty in the book. What examples of loyalty or disloyalty are depicted therein? To what are the characters faithful? Does the loyalty of the characters shift or remain consistent? Does Pears’s overall treatment of loyalty propose anything about human nature?

11. What does the novel suggest about identity? Are the characters easily identified in the various storylines? Is the identity of any particular character surprising, and if so, why? Does the book suggest whether identity is a static or fluid state? What seems to determine or shape the identity of the characters?

12. How does Arcadia uphold or otherwise defy traditional notions of genre? Is the book easily categorized? Explain. What genres are represented therein?

16. What is the Devil’s Handwriting? Who wants to find it and what do they want to do with it? Why is it significant to those who want to get their hands on it? Is it recovered? What does it ultimately reveal?

17. Consider the treatment of colonization and the treatment of indigenous peoples as a theme of the book. What does the novel suggest about this topic? How does Pears tackle the idea of the foreign in the novel?

18. Who are the Renegades, and what are some of their beliefs? Why do the elite scientists hope to contain them? Which group do you identify with more, in terms of what they wish to uphold and accomplish?

20. Evaluate the final chapter of the novel. Were you surprised at the conclusion? Explain. How does the conclusion relate to the overall structure of the book and the major themes of Arcadia?