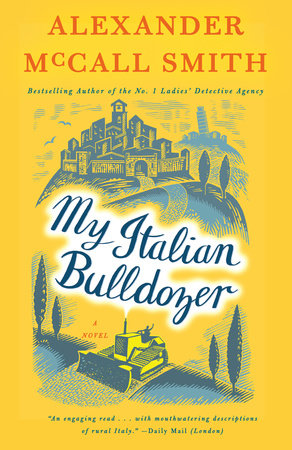 The questions, discussion topics, and reading list that follow are intended to enhance your reading group’s discussion of My Italian Bulldozer by Alexander McCall Smith. A feast for the senses and a poignant meditation on the complexity of human relationships, this novel of one man’s adventures in the Italian countryside is a charming and satisfying love story for anyone who has ever dreamed of a fresh start.


1. In an essay about the setting for My Italian Bulldozer, Alexander McCall Smith writes, “How do you start falling in love with a country? When you first see it? When you first hear its music, or sample its food or wine, or meet some beguiling person from the country in question? There are many routes to the heart, and all of these play a role.” He describes his relationship with Italy and how he finally decided to write about the country. Have you ever fallen in love with a country? Which country and why did you fall in love with it?

2. How is Italy not only the setting but also a character in this novel?

3. Compare and contrast this novel with any other novels you’ve read by McCall Smith. What does the author say about finding love and the importance of love in this novel?

4. What is unexpected in or surprising about this novel?

6. Alexander McCall Smith, in interviews, often talks about the importance of the simple things in life. In this novel, Paul discusses how “at the heart of this Tuscan tradition of plain cooking lie beans in all their simplicity” (p. 89). And a chapter later, he contemplates life in the Tuscan countryside, “What would have counted were things far more elemental: the spring rain, the winter frost, fire, the failure of crops. That is what mattered.” Do you think the novel is a call to live simply? Do you think Paul and the author are romanticizing country living?

7. Later in the novel, Paul and Anna discuss how Montalcino is changing due to the success of the wine, and Anna says this is “such a pity.” Paul argues with “You can’t expect people to pick poverty because it’s picturesque” (p. 120).  Whom you agree with in this argument and why?

8. Winemaker Tonio tells Paul that in Italy, “everyone is envious of everyone else” and Paul says in Scotland, the situation is called “tall poppy syndrome. If somebody does anything exceptional, then others will want to cut him down to size” (p. 95). Give some examples of this in your experience.

9. Describe Silvio, the historian on the airplane who helps Paul with his rental car predicament. How is he a good introduction to Italy?

10. Paul doesn’t really want to take the bulldozer, but he feels he has to as everyone is going to such extremes to help him and being so nice. Have you ever been in a similar situation, not with a bulldozer but where you’ve done or taken something you didn’t want? What would you have done in Paul’s place? In the end, how does the bulldozer, open Paul up to new experiences? “In Italy, we are always open to new experiences” (p. 56).

12. Describe the friendship between Paul and Gloria. Does it evolve through time and the novel? Do you think they will be happy together in the future? How has Paul not really seen her until he goes away to Italy?

13. What does Becky represent? Why is she so fickle? Why do you think she and Paul were once together as a couple?

14. “Sometimes the things that are most important to you are right under your nose and you just don’t notice them. Then you realize how rich life is, and how precious” (p. 232). Discuss this passage and retell a story from your own experience.

15. Priest Stefano advises Paul: “Follow your heart…it’s the best compass there is” (p. 230). Does Paul take this advice? How?

16. Onesto praises Paul for moving the earth on Tonio’s vineyard, “Fortunately there are brave people who are prepared to take the risk, who do these things, often in such a way that nobody can see them. They say, "The world doesn’t have to be the way it is; we can change it” (p. 229). What do you think of what the men have Paul do on Tonio’s vineyard? It is illegal, but do you think in the end it was morally fair and important to do?

17. How is art important in this novel? Why do you think the author made Anna an art historian studying Caravaggio? How does Caravaggio’s art and life relate to the novel?

19. Paul describes being in love as “It’s like waiting for something terribly important to happen; it’s like being on the edge of something; it’s like hearing loud chords of Bach resonating in some great cathedral; it’s like surfing a giant wave, being carried, barreled along by the roaring watery creative beneath one” (p. 205). Using your own similes, describe falling in love.

20. Describe how this novel is both a traditional romantic comedy and how it is not.