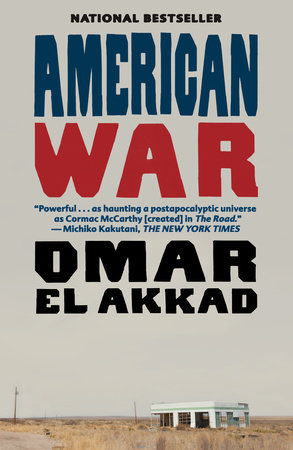 The questions, discussion topics, and reading list that follow are intended to enhance your reading group’s discussion of American War, a darkly prescient tale of a country, and a world, torn apart by war in the late twenty-first century, and the young heroine whose commitment to her family takes on the epic proportions of the second installment of America’s battle against itself.


1. The novel’s epigraphs are taken from two classic texts, an ancient Arabic book of poems and the Bible. What do the quotes and their sources suggest about the conflict that will follow in the novel?

2. Were you surprised by the way the map of the United States has been altered—the states’ borders and the landmasses themselves—in the projections for 2075? What do you think caused those changes; was it solely politics or other forces as well?

3. What does the first-person narrator we meet in the prologue explain—and not explain—about how the country has changed, the timeline of the Second American Civil War itself, and the unnamed “she” who has stayed in his memory since his youth?

4. What is the significance of Sarat’s changing of her own name when she’s a girl? How does that sense of agency and identity develop as she gets older? How does her having a twin sister fit into your understanding of her independence and actions?

5. The novel presents many different laws, agencies, and other government entities for the future America. Which did you find to be most plausible, including as sources for political conflict that would escalate into war? Are any similar to real-life policies as you’re reading about them today?

6. Describe the dynamic of the Chestnut family, parents and children. What’s similar and what’s different about domestic life in their world versus today’s and during the time of the first Civil War?

7. How pervasive is the allegiance to the Free Southern State where the Chestnuts live and throughout the cordoned region? What threats do those who disagree with the cause face?

8. How closely do the events and details of the Second American Civil War follow those of the first and/or other historical events in American history? After you finished the novel, were you more or less likely to think another such conflict could happen again in this way, on a national or global scale?

9. How do the interludes of primary source texts—textbook excerpts, government reports, notebooks, letters, etc.—enhance the personal story of Sarat and her family, in terms of the motives for and timeline of the war on a micro and macro level?

10. What gender stereotypes persist in the future between the young girls and boys, especially once the family reaches Camp Patience? How does Sarat push back against expectations of what she can and cannot do, including in contrast to her sister and brother?

11. How does the novel complicate the meaning of “home,” in a personal and national level? Does where and how a character lives at any given point determine his or her sense of security or belonging, or does this feeling come from somewhere else?

12. Sarat sees on Albert Gaines’s, a northerner’s, map different kinds of borders and observes, “To the north the land looked the same but she knew there existed some invisible fissure in the earth where her people’s country ended and the enemy’s began.” (163) How did such fissures form, and what does the outcome of the war and novel suggest about their ability to be healed?

13. How does Sarat’s plight speak to Gaines’s statement that “the first thing they try to take from you is your history”? (150)

14. What defines one’s sense of “belief” in the novel? Are people more motivated by personal beliefs, or by more institutional ones like religion or politics?

15. How are certain characters in the novel mythologized? What does this do to their day-to-day existence and their legacy? How do the mythic characters in the book parallel historical figures in what they’re remembered for and how?

16. Discuss the sequence of events and outcomes of the plague. How does that kind of warfare reflect advancements in society as well as the sense of humanity’s worth?

17. What is the role of love in the novel? By the story’s conclusion, does the idea of love conquering all still apply, or does revenge supersede it?

18. Many historians consider the first Civil War to have been a battle of the past (the South) versus the future (the North). Do those distinctions apply to the Second American Civil War, and what does this say about the future—and present—of the country and those running it?