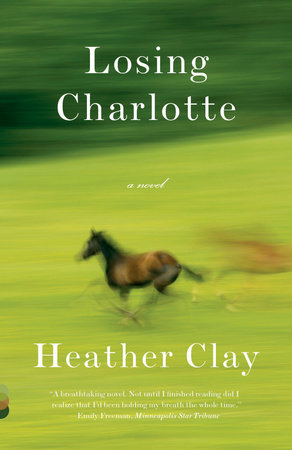 The questions, discussion topics, and suggestions for further reading that follow are intended to enhance your group's reading of Heather Clay’s Losing Charlotte, a moving exploration of  the complicated ties between two sisters and the effects of loss on an entire family


1. What does the prologue tell you about the relationship between Charlotte and Knox and the roles they have in the family? What responsibilities does the young Knox assume and why?

2. In considering her life, Knox says, “It traveled in concentric circles around her, like orbiting matter, and her job was to stay fixed and let it happen” [p. 16].  Does this reflect a sense of contentment or does it represent a willful passivity and even smugness?  What aspects of her interactions with Marlene support your view?  In what ways does teaching dyslexic children satisfy Knox’s image of herself and her place in the world?

3. To what extent is Knox’s attitude toward Ned based on her father and the family dynamic she has always known? Why does she find male vulnerability off-putting? Does this explain her antipathy to Charlotte’s choice of a husband and her own reluctance to marry Ned or are there other factors at work?

4. Discuss the conversation between Charlotte and Knox [pp. 25–30]. Is reverting to childhood patterns—“to love and hate each other so nakedly, and so simultaneously”—common between adult siblings? Are the thoughts and feelings of each sister presented fairly or are they seen solely through Knox’s eyes?

5. Why does Bruce’s narrative begin with the flashback to his childhood and his reaction to the disappearance of his friend’s mother [pp. 43–54]? How does it relate to the descriptions of Charlotte’s childhood home?

6. How would you characterize the relationship between Bruce and Charlotte? What needs does Charlotte fulfill for Bruce? What does Bruce provide for Charlotte? Why does Charlotte create false or at least fanciful images of herself and of Bruce? What do Bruce’s description of their relationship and his confession [pp. 147–148] suggest about his commitment to Charlotte? Do most couples experience “a moment—or many—that would remain forever inexplicable to anyone else but was understood within their universe of two, rendering them bound in a new way” [p. 149]?

7. What do the family’s reactions to Charlotte’s death show about the ways people cope with tragedy [pp. 117–118]?  What do their emotional states, both at the hospital and when they return to Kentucky, reveal about Knox’s understanding of herself, her father, and her mother? What role does Robbie fill for her?

8. Discuss Bruce’s impressions of Charlotte’s childhood and the conclusions he has drawn about her parents and Knox [pp. 142–143].  Why does he accept  “the synopsis Charlotte had arrived at after years spent in therapy and engaged in the burial of her former self” [p. 143]?  How does this influence his behavior with Knox?

9. What does the Christmas dinner [pp. 153–161], as well as the conversation the sisters have at the bar [pp. 166–169], show about the beliefs, real or imagined, that shape the way they view each other? Do you think Knox misreads, misremembers, or exaggerates Charlotte’s behavior and its effects on the family?

10. How do alternating perspectives of Knox and Bruce affect the portrait of Charlotte? What do their descriptions of Charlotte’s behavior and attitudes have in common? Is one perspective more reliable than the other?  Is Bruce more willing than Knox to acknowledge personal hang-ups and biases? In what ways does the time she spends in New York force Knox to explore and come to terms with her mixed feelings about Charlotte [pp. 198–199; 204–207; 214–216]?

11. What propels the growing intimacy between Bruce and Knox? Contemplating the consequences, Knox thinks, “She couldn’t claim not to have chosen it, or to have been swept into something she wasn’t conscious of, or couldn’t control” [p. 235].  Do you think that Bruce feels the same way?

12. “There were moments in everyone’s life, Knox supposed, that showed you that you weren’t the person you thought.  Maybe these moments taught you something good about yourself, or shamed you” [p. 248]. What has Knox learned about herself by the novel’s end?

13. In an interview Heather Clay said “I had heard of maternal deaths like the one that occurs in Losing Charlotte . . . . And the idea of something so Victorian happening in a modern hospital setting led me to wonder how such an event would affect the modern family” [randomhouse.com]. What historical or literary traditions does Clay draw on?

14. What does Losing Charlotte illustrate about caretaking and parenting? What is the significance of Knox’s view that the sisters had "been forced by birth into mutual territory and yet emerged . . . as if they'd been raised in separate countries” [p. 30]?  To what extent are Mina and Ben responsible for the competitiveness and resentments that exist between Charlotte and Knox? In what ways are Bruce and Knox transformed by the obligations as well as the pleasures of taking care of the twins? How does Knox’s notion of herself as family caretaker evolve throughout the novel?

15. Part of the novel takes place in Kentucky and part in New York City. How does the contrast between the two settings enrich the themes of the novel? How do the depictions of the secondary characters—Marlene and Ned in Kentucky, Bruce’s mother and his friend Jeb Jackman and Charlotte’s ex-boyfriend Stephen in New York, for example—reinforce the sense of place and culture?

16. The rhythms of nature and the breeding cycles on the stud farm are an integral part of the novel [p. 33, for example]. How do these descriptions serve as metaphors for human behavior?


(For a complete list of available reading group guides, and to sign up for the Reading Group Center enewsletter, visit: www.readinggroupcenter.com.)