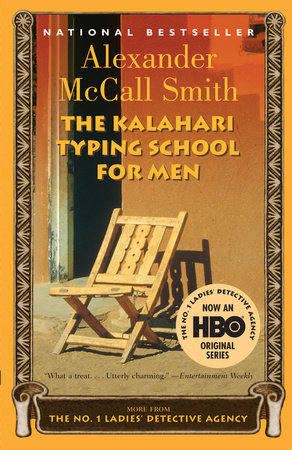 The Kalahari Typing School for Men

The introduction, discussion questions, author biography, and suggested reading list that follow are designed to enhance your group’s discussion of Alexander McCall Smith’s The Kalahari Typing School for Men, the fourth novel in the acclaimed No. 1 Ladies’ Detective Agency series.


1. Mma Ramotswe observes, “The trouble with men, of course, was that they went about with their eyes half closed for much of the time. Sometimes Mma Ramotswe wondered whether men actually wanted to see anything, or whether they decided that they would notice only the things that interested them” [p. 17]. What other statements about the differences between men and women occur in The Kalahari Typing School for Men? What perception about male psychology allows Mma Makutsi to open the typing school?

2. What prompts Mr. Molefelo to seek out Mma Ramotswe’s help? How is his request different from what most people would ask of a private detective?

3. In considering the changing morality of modern times, Mma Ramotswe suggests that people are now “far too ready to abandon their husbands and wives because they had tired of them. . . . And friends, too. They could become very demanding, but all you had to do was to walk out. Where had all this come from, she wondered. It was not African, she thought, and it certainly had nothing to do with the old Botswana morality. So it must have come from somewhere else” [pp. 109–110]. Where might such changes in attitude have come from? What are the consequences of this weakened sense of loyalty, both in the novel particularly, and in society more generally?

5. Discussing the relationship between education and experience, Mma Potokwani says, “You don’t have to read a book to understand how the world works. . . . You just have to keep your eyes open.” Mma Ramotswe agrees but feels a “great respect for books. . . . One could never read enough. Never” [p. 133]. How does Mma Ramotswe embody a balance between knowledge gained from life experience and knowledge gained from books?

6. Why does Mr. Cephas Buthelezi, the arrogant detective who tries to usurp Mma Ramotswe, decide to quit? Why do all his experience, training, and travels fail to serve him in Botswana? What does he lack that Mma Ramotswe has?

7. As Mma Ramotswe confronts Mr. Selepeng about his behavior toward Mma Makutsi, she refrains from lecturing him. “I could never be a judge, she thought; I could not sit there and punish people after they have begun to feel sorry for what they have done” [p. 183]. Where else in the novel does she exhibit this ability to listen without judging? How does this ethos differ from the typical ways of dealing with the guilty in American detective fiction and American life in general? Why is Mma Ramotswe able to feel such compassion even for those who have clearly hurt others?

8. Near the end of The Kalahari Typing School for Men, as the novel’s various problems are being resolved, Mma Ramotswe observes, “It was astonishing how life had a way of working out, even when everything looked so complicated and unpromising” [p. 188]. Does the novel resolve its problems too easily? Or do these resolutions faithfully reflect the degree to which Mma Ramotswe, Mma Makutsi, Mr J.L.B. Maketoni, Mma Potokwani, and other characters live in harmony with their world?

9. Mr. Buthelezi trumpets his “toughness” and police-force experience in dealing with serious criminals, along with his knowledge of how detective work is carried out in New York and other big cities. Through the character of Mr. Buthelezi, is Alexander McCall Smith making a statement about the kind of detective who appears in more conventional mystery novels? Why is Mr. Buthelezi so ill suited to the needs of the people of Botswana?

10. What is so appealing about the world in which Mma Ramotswe lives? In what ways is it different from contemporary American society? Are the values and attitudes of Mma Ramotswe translatable into American life?

11. If you have read any of the other novels in the series, what are the recurring themes and situations? In what ways are the books similar? How does Alexander McCall Smith keep the stories fresh?

12. In place of violence and revenge, the novels in the No. 1 Ladies’ Detective series substitute understanding and forgiveness. How is Alexander McCall Smith able to make this reversal of values so satisfying, in both the literary and moral senses?