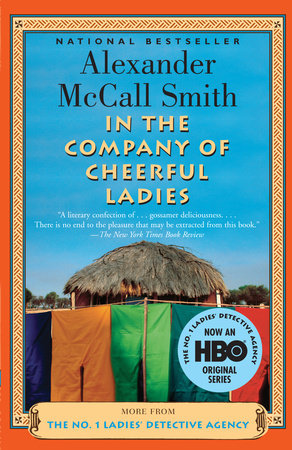 In the Company of Cheerful Ladies

“A literary confection of . . . gossamer deliciousness. . . . There is no end to the pleasure that may be extracted from this book.”
—The New York Times Book Review

The introduction, discussion questions, suggestions for further reading, and author biography that follow are designed to enhance your group’s discussion of Alexander McCall Smith’s In the Company of Cheerful Ladies, the sixth novel in the acclaimed No. 1 Ladies’ Detective Agency series.


1. In the opening scene, Mma Ramotswe watches as a driver sideswipes a parked car and drives away without taking responsibility and as a woman at a market steals a bracelet from a merchant when his back is turned. Mma Ramotswe jumps up from the café and tries to alert the merchant to the robbery, but her waitress accuses her of trying to run out on the bill and attempts to elicit a bribe. How do such behaviors mark the difference, for Mma Ramotswe, between the old Botswana and the new? Why does she wish to maintain ties to the old ways of thinking?

2. Detective stories usually have complex plots and eventually solve a mystery. McCall Smith’s books, however, are not so much based on plot as on human interaction and on the fact that “the unexplained was unexplained not because there was anything beyond explanation, but simply because the ordinary, day-to-day explanation had not made itself apparent. Once one began to enquire, so-called mysteries rapidly tended to become something more prosaic” [p. 17]. How does Mma Ramotswe’s approach to the detective’s profession differ from that found in other detective novels you have read? Why is the mystery of the intruder left unresolved at the end of the story?

3. At the church service Mma Ramotswe reflects, “It was a time of sickness, and charity was sorely tested. There were mothers here, mothers who would leave children behind them if they were called” [p. 27]. The minister refers to “this cruel illness that stalks Africa” [p. 31]. While the book doesn’t refer directly to HIV/AIDS, how does this deadly epidemic inflect McCall Smith’s presentation of modern Botswana, as well as his presentation of Mma Ramotswe’s state of mind?

4. Is it surprising that Mma Ramotswe and Mma Makutsi interfere in Charlie’s affair with the woman in the Mercedes? How do they justify this intervention?

5. The state of people’s clothes and hands, their manner of speaking, and countless other details are indicators from which we can make guesses about them. How does Mma Ramotswe conclude that Mr Polopetsi, regardless of having been in prison, is a good man [p. 52]? Why was she not, in the past, similarly observant about the character of Note Mokoti?

6. Why do Mma Ramotswe and Mma Makutsi have nothing to say when Mr Polopetsi finishes the story of how he went to jail?

7. What does Mma Ramotswe think of the irresponsible behavior of men like Charlie and its effects on their lives and the lives of people around them? Why does she take a dim view of men on the whole, with the exception of men like Mr J. L. B. Matekoni and Mr Polopetsi?

8. Like Jane Austen, McCall Smith is interested in manners. Think, for example, about how and why Grace eventually gained the courage to buy her own tea-pot so she could brew her own tea, how Mma Ramotswe apologized to Grace for assuming that she liked bush tea [p. 41], and how Charlie drained oil into that tea-pot [pp. 74–75]. Why are a person’s manners such a precise indicator of his or her character?

9. How does Grace overcome her initial impression of Phuti Radiphuti, and what qualities does she come to see in him? As a reader, what is your impression of Rra Radiphuti?

10. Consider some of the beloved objects in the novel, like Mma Ramotswe’s tiny white van or Mma Makutsi’s lace handkerchief. What is their significance?

11. In the marriage of Mr J. L. B. Matekoni and Mma Ramotswe, much is left unsaid. For instance, when Note Mokoti comes to the garage, Rra Matekoni never asks Precious who this man is, and she doesn’t feel obligated to tell him. Is this degree of privacy unusual in a marriage? Are the two characters very different from each other? What is the foundation of their relationship?

12. What is the effect of reading that Mma Ramotswe, who is thought of as indomitable by the other characters, succumbs to fear and weakness in the presence of Note Mokoti? What is the source of his power, and what does this reveal about her character, past and present? How does she manage to subdue her fear?

13. If you have read other books in The No. 1 Ladies’ Detective Agency series, do the stories feel like one continuous novel, or do the individual volumes stand as discrete novels independent of the others? Is it important, for understanding the characters and their situations, to read the books in order, or is the order irrelevant?

15. A typographic design, repeating the word Africa, follows the novel’s final sentence. How does this affect your reading of the ending, and what emotions does it express?