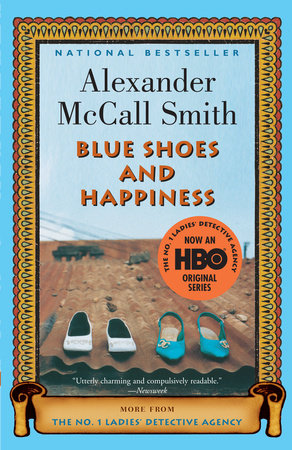 The introduction, discussion questions, author biography, and suggestions for further reading that follow are designed to enhance your group’s discussion of Alexander McCall Smith’s Blue Shoes and Happiness, the seventh installment in the acclaimed No. 1 Ladies’ Detective Agency series.


1. “We are all human beings, and human beings can’t really help themselves. Have you noticed that, Mma? We can’t really help ourselves from doing things that land us in all sorts of trouble” (p. 4). From this observation, spoken by Mma Ramotswe to Mma Makutsi, proceeds the plot of Blue Shoes and Happiness. How are the characters in this story responsible for creating their own problems?

2. Why does Mma Ramotswe rely so loyally upon the advice of Clovis Andersen’s The Principles of Private Detection? Consider this example: “Keep your mouth shut at all times, but at the same time encourage others to do precisely the opposite” (p. 12). What does Mma Ramotswe admire about such advice? How does she judge the quality of the advice given by Aunty Emang, the newspaper columnist? What do you think of Aunty Emang’s advice? What about Clovis Andersen’s?

3. Much of the satisfaction of the No. 1 Ladies’ Detective Agency novels lies in their precise observations of daily life as experienced by women: “That was part of being a woman, [Mma Ramotswe] thought; one never reached the end. Even if one could sit down and drink a cup of bush tea, or even two cups, one always knew that at the end of the tea somebody was waiting for something” (pp. 12-13). Is it at all surprising that the writer of these observations is a man? Why do you suppose that Alexander McCall Smith has so much empathy for his female characters?

4. Although the HIV/AIDS crisis is a major health problem facing Africa today Alexander McCall Smith addresses it in subtle and delicate ways in his series such as in the following exchange: “Ever since women allowed men to think that they did not need to get married, everything has gone wrong,” Mma Ramotswe tells a client. The client replies, “Look at the mess. Look at what all this unfaithfulness has done. People are dying because of that, aren’t they?” (pp. 35-36). How does the author address the crisis in this book, and if you’ve read the others, in the series? Why do you think he handles it in this fashion? How do you feel about his treatment of the crisis?

5. Charlie and the younger apprentice fail to trap a cobra that has invaded the office. Why might the chapter’s title, “Correct and Incorrect Ways of Dealing With a Snake,” also be “Correct and Incorrect Ways of Being a Man”? Why does Mma Ramotswe conclude about the incident, “Snakes were one of the tests which life sent for us, and there was no telling how we might respond until the moment arrived. Snakes and men. These were the things sent to try women, and the outcome was not always what we might want it to be” (p. 26)?

6. Grace Makutsi has several mental conversations with her shoes; see for instance pages 64-65 and 108. How do they convey a part of Mma Makutsi’s character? What do the blue shoes represent for her? How difficult is it for her to come to terms with the fact that they were not a practical purchase?

7. What is the mistake that Mma Makutsi makes when telling Phuti Radiphuti that she is feminist (pp. 54-55), and why doesn’t she see this problem in advance? What feelings does she evoke when she says to herself, “I am a girl from Bobonong, with glasses.” (p. 88)?

9. Mma Tsau, who has threatened Poppy with dismissal, turns out to be a woman who loves her philandering husband too much. How does Mma Ramotswe deal with the villains of the novel—Mma Tsau, Aunty Emang, and Dr. Lubega? What skills does she use in solving these cases? How does her attitude differ toward each of the women and why?

10. Mr. J. L. B. Maketoni’s two apprentices are representative, for Mma Ramotswe, of a larger problem with the future of Botswana: the young people are abandoning the culture’s traditional values. Regarding the promiscuity of girls and boys alike, she thinks, “One should just not do it, because that was not how the old Botswana morality worked. There was such a thing as shame…although there were many people who seemed to forget it” (p. 59). Does it seem that, according to Mma Ramotswe, relations between men and women are crucial to the structures upon which society rests?

11. The old Botswana morality is exemplified in the following passage: “So it was in Botswana, almost everywhere; ties of kinship, no matter how attenuated by distance or time, linked one person to another, weaving across the country a human blanket of love and community. And in the fibres of that blanket there were threads of obligation that meant that one could not ignore the claims of others. Nobody should starve; nobody should feel that they were outsiders; nobody should be alone in their sadness” (p. 68). Do these ethical principles of responsibility and caring still exist as a basic element of American culture? How are they reflected in this book? Do they seem as pervasive in Botswana as Mma Ramotswe believes?

12. Alexander McCall Smith has said that his novels “represent the range of things I would like to say about the world.” What are the most important ideas among the “range of things” represented by this book and others in the series?

14. A typographic design, repeating the word Africa, follows the novel’s final sentence. How does this affect your reading of the ending, and what emotion does it express?