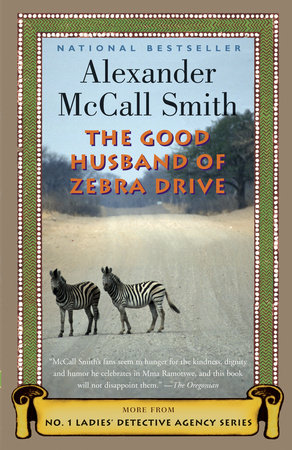 The Good Husband of Zebra Drive

“McCall Smith’s fans seem to hunger for the kindness, dignity and humor he celebrates in Mma Ramotswe, and this book will not disappoint them.”
—The Oregonian

The questions and discussion topics that follow are intended to enhance your group’s discussion of Alexander McCall Smith’s The Good Husband of Zebra Drive, the eighth installment in the acclaimed No. 1 Ladies’ Detective Agency series.


1. In what ways does the early morning scene at the beginning of the novel, with Mma Ramotswe surveying the Botswana landscape from her garden, set the tone for what is to come [pp. 4-7]? Why is the landscape an important element in Mma Ramotswe's consciousness?

2. Both Grace Makutsi and Mr J.L.B. Matekoni are restless in their current work. Why does it worry Mma Ramotswe that when she argues that all work is repetitive, her husband replies that he would like to “try something different,” and handle the case of the woman client he interviewed that morning [pp. 41-42]? Later we learn that J.L.B. Matekoni is worried about a rival for his wife, and asks himself, “How does a husband become more exciting?” [p. 81]. What elements of his character are revealed in the course of the story?

3. When Mr Polopetsi asks Mma Ramotswe to be his son's godmother, she doesn't hesitate to say yes. Yet she realizes that it will put her under various obligations to the boy. She thinks, “But we cannot always choose whose lives will become entangled with our own; these things happen to us, come to us uninvited” [p. 55]. What is the etiquette called for at a moment like this, and why?

4. When her husband first reports on interviewing Mma Botumile, Mma Ramotswe is impressed with his powers of observation [pp. 14-15]. What goes wrong with his investigation? How does the confusion about identity follow through in his mistake about Mma Ramotswe's other man [p. 176]?

5. Mr J.L.B. Matekoni is amazed at the rudeness of Mma Botumile, and doesn't understand why she behaves as she does. “In his experience bad behaviour came from those who were unsure of themselves, those who had some obscure point to make” [p. 83]. Is there any obvious reason why this woman is so rude, particularly since she lives in Botswana, “a polite country” [p. 83]?

6. Grace is humiliated by her former classmate, Violet Sephotho, when she goes to an employment agency to seek a new job [p. 102]. How is this encounter similar to Mr J.L.B. Matekoni's meetings with Mma Botumile? What is the effect, on Grace, of being treated so rudely? How does this meeting change her feelings about Mma Ramotswe and the job she has left?

7. What is the nature of the conflict between Grace Makutsi and Charlie, the apprentice [pp. 59-64]? What change does Grace have to undergo in order to behave more kindly toward Charlie? Is there any particular reason she has been able to make this change in herself?

8. Mma Makutsi sometimes has trouble controlling herself when it comes to saying what is on her mind. How does this characteristic create trouble for her, and how does it create comedy in the novel?

9. Thinking about the small-time thievery going on at Teenie Magama's printing business, Mma Makutsi realizes that some people “were governed by some impulse within them that stopped them from feeling and understanding” how their actions affected others [pp. 113-14]. How does Mma Makutsi suggest the thief be dealt with, and how does this experiment in human behavior work out?

10. “Disputes, even between nations, between peoples, can be set to rest with simple acts of contrition and corresponding forgiveness, can so often be shown to be based on nothing much other than pride and misunderstanding, and the forgetting of the humanity of the other-and land, of course” [p. 127]. To whom do you attribute this speech? Is there a recognizable narrative voice in the novel, and is this speech the product of the narrator's consciousness?

11. Is it likely that Charlie's accident with the Mercedes will have an effect on his habitual irresponsibility [p. 154]? How does Mr J.L.B. Matekoni behave when Charlie returns, humiliated, to resume his apprenticeship [p. 191]?

12. The title of the novel focuses on “the good husband” Mr J.L.B. Matekoni, who, we learn, suffers from depression and has been treated with medication [p. 177]. Depressives, he has been told by Dr Moffat, sometimes suffer from delusional thinking, and he finds himself wondering if Mma Ramotswe would betray him with another man. Does this story develop the character of Mr J.L.B. Matekoni in ways we haven't seen before? If so, how?

13. How does Mma Ramotswe deal with the discovery of who is responsible for the mysterious deaths of three patients in the intensive care ward? Why, when she breaks the news to Tati Monyena, does she offer to say grace [p. 207]? How would you describe the quality of Mma Ramotswe's spirituality, and how does it inform her treatment of others?

14. Detective stories usually have complex plots and eventually provide a solution to a mystery. McCall Smith's books, however, are not so much based on plot as on human interaction and on the fact that misunderstandings and errors are the stuff of daily life. How does Mma Ramotswe's approach to the detective's profession differ from that in other detective novels?

16. A typographic design, repeating the word Africa, follows the novel's final sentence. How does this affect your reading of the ending, and what emotions does it express?

17. No less than those of Jane Austen, the novels of Alexander McCall Smith are studies in the comedy of manners—stories based on a close observation of the foibles of human behavior and interaction. Think about how Emma's behavior is cruel and mocking toward Miss Bates, and Mr. Darcy's is condescending and rude toward Eliza Bennet at the dance. What might Mma Ramotswe have said about these situations?