WHAT: THE LONG TAKE,
or, A Way to Lose More Slowly

WHERE: The author lives in London

WHY: A hypnotic and wrenching novel in verse.
“Arriving in New York City in 1946, young WWII veteran Walker is assailed by memories of his childhood in pristine Nova Scotia and tormented by PTSD and guilt. Unable to sleep, he paces the night streets, absorbing the city’s hustle and edgy beauty, his restlessness eventually propelling him to Los Angeles.
“In this hypnotic and wrenching novel in verse, this ‘noir narrative,’ shortlisted for the Man Booker Prize, award-winning Scottish poet Robertson draws on the aesthetics of classic noir films, which his protagonist loves, especially the dramatic ‘long take.’
“Walker, working as a newspaper reporter, performs his own long takes as he watches this desert city of celluloid dreams demolish its homes, shops, and sidewalks to build freeways and parking lots while veterans unable to find work form a desperate army of the homeless. Walker’s ravishing observations, punctuated by visits to dive bars, are laced with cinematic variations on the yin-yang of dark and light as he witnesses the ravages of racism, poverty, and alcohol; takes measure of gruesome crime scenes; and despairs of ever making things right.
“Robertson transforms the long take into an epic taking of life, liberty, reason, and hope in this saga of a good man broken by war and a city savaged by greed, an arresting and gorgeously lyrical and disquieting tale of brutal authenticity, hard-won compassion, and stygian splendor.” —Donna Seaman, in a starred review for BOOKLIST

“An epic poem of homelessness, dislocation, and inequality
—set not today, though it could have been, but instead in the years after World War II…Robertson’s skillful weaving of cinematic history into a storyline that embraces hard-boiled journalism, the paranoia of the McCarthy era, and a kind of reflexive if sometimes-ironic nationalism that has never disappeared makes for juxtapositions that are sometimes unexpected but just right.” —KIRKUS REVIEWS 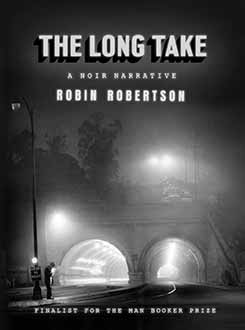