WHAT: LIFE UNDERCOVER:
Coming of Age in the CIA

WHY: “This memoir reads like a great espionage novel.
“Amaryllis Fox delivers a gripping memoir about the near decade she spent working for the CIA to help stop terrorism.
“The 2002 kidnapping and beheading by extremists of her writing mentor, journalist Daniel Pearl, compelled Fox to apply to the master’s program in conflict and terrorism at Georgetown University. Her thesis work caught the attention of a CIA official in residence at the school, and she enthrallingly discusses joining the CIA at 22 and then being selected to be part of the CIA’s elite Clandestine Service, where her duties included mapping the connections between al Qaeda lieutenants.
“In her strange new world, every colleague has a bogus identity, and Fox’s description of her wedding day is surreal: ‘I walk down the aisle, past work friends whose real names I’ll never know,’ she writes. Fox’s work to prevent terror attacks — some of which she conducted while pregnant — involved tracking arms deals and took her to places like Tunisia, where she connected with a Hungarian arms dealer she later recruited for the CIA, and to Pakistan, where she convinced militants not to go through with a planned bombing. Fox’s CIA life ended after the birth of her daughter, who inspired her to shed her ‘mask’ and work publicly for peace as a community builder. Fox masterfully conveys the exhilaration and loneliness of life undercover.”
—PUBLISHERS WEEKLY, a boxed and starred review

“Fox’s clear, present-tense prose keeps readers in the action
while maintaining the heft of reality, even in totally surreal situations. With loads of suspense and adrenaline, this insider’s view into how the CIA functions and what life is like for a covert agent will appeal to many, including readers who don’t normally stray from fiction thrillers.”
—Kathy Sexton, in a starred review for BOOKLIST

“A well-written account of a life lived under exceptional secrecy and pressure.”
—KIRKUS REVIEWS

In the glass, I can see the man who’s trailing me. I first noticed him a few turns back, his path correlated with mine in the mess of Karachi back alleys. Our reflections mingle in the tailor’s window. He is horse-faced and tall. His palms open and close as he walks. “The security of the veil,” a poster reads, above burqas and hijabs.

Ahead of me, the bus I’d planned to board comes and goes, covered in an ecstasy of pigment and pattern. Every square inch is painted with bright shapes and swirls, intricate and infinite, like a Mardi Gras parade float, a diesel temple to the pleasure of the eye. It has the look of a free thing burdened, a slow-lumbering dragon, weighed down by its own beauty and the commuters that hang from its belly and back. They are my favorite thing about Pakistan, these buses. Against the dust and the smog and the honking of horns, they are startling, like the discovery of a kindred soul behind the otherwise dull face of a stranger. 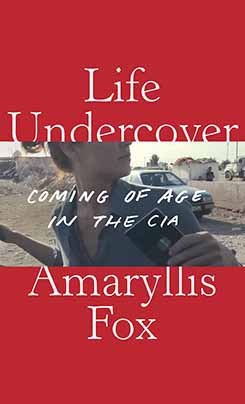