WHAT: EARLY WARNING, her new novel

WHY: “Smiley consummately articulates the micro and the macro, the comedic and the tragic in this grand story of an iconic American family.
“Smiley continues the multigenerational, cross-country saga of the Iowa-rooted Langdon family she began in Some Luck. As before, each chapter covers a year, this time from 1953 to 1986, and once again Smiley adeptly meshes diverse personal experiences with landmark events and seismic shifts in social consciousness.
“First-born Frank, a darkly glamorous former WWII sniper with an eidetic memory, glides into the upper echelons of the booming postwar weapons and oil industries while continuing to assist Arthur, his profoundly tormented CIA operative brother-in-law, in covert operations. Frank’s wife fears the atomic bomb, lies to her psychoanalysts, and drinks too much, while their daughter is drawn into Reverend Jim Jones’ Peoples Temple, and their twin sons practice a violent form of sibling rivalry. Arthur and Lillian’s son serves in Vietnam, Frank’s professor brother carefully embraces his taboo sexuality, sister Claire endures a smothering marriage, and the matriarch, Rosanna, turns startlingly adventurous.
“With penetrating looks at the military, the dawn of rock and roll, the Kennedy and King assassinations, Watergate, and the farm crisis, Smiley demonstrates an incisive historical perspective, virtuosic omniscient narration, free-flowing empathy, and a gift for sparring dialogue. Every scene is saturated with sensuous and emotional detail.”
—Donna Seaman, in a starred review for BOOKLIST 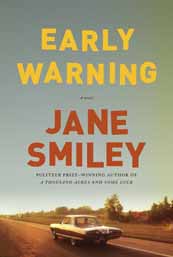 “Smiley paints pictures with her words, describing the intricacies of each character, even the unlikeable, as the family steadily grows owing to marriages and births.” —Stephanie Sendaula, LIBRARY JOURNAL

“Pick up Some Luck, ride out the Depression and WWII with Walter, Rosanna, and Frank, then come back to the atom-and-adultery-haunted volume two.”
—PUBLISHERS WEEKLY