Posts Tagged ‘An Instance of the Fingerpost’

WHAT: ARCADIA, a novel

WHY: “This genre-bending,
time-collapsing tour-de-force dazzles.
“Pears seems to love three-part harmony, though time, not music, is his medium of choice. In Stone’s Fall and The Dream of Scipio, he weaved remarkably complex stories set in three different time periods that echoed one another, fugue-like, with interlocking themes.
“Here he ups the ante dramatically: there are three distinct time periods again, but they exist simultaneously, the linear notion of time having been replaced by an Einsteinian continuum. Prepare to experience a little narrative vertigo here, even in summary: one of these worlds is recognizable, 1960 Britain, where a tweedy Shakespeare professor and part-time spy, Henry Lytten, gathers with colleagues to spin tales of fantasy worlds — the pop novels they dream of writing; the second world is a dystopian future in which Angela Meerson, a maverick ‘psychomathematician’ who harnesses emotions to power her calculations, has created a super-duper time machine; and, finally, there is Arcadia, called Anterworld, a universe that Meerson has created from Henry’s notes describing his would-be fantasy novel.
“Dizzy yet? The spins are just beginning. Thanks to Meerson’s machine, various characters, including a 15-year-old girl named Rosalind (Henry teaches Shakespeare, remember), jump from Cold War Britain to Anterworld, creating chaos in the process. If you think of what Stephen King did with time in 11/22/63 as being an undergraduate survey course in physics, then Pears’ novel is the equivalent of Princeton’s Institute for Advanced Study.
“It all starts with a problem common to every age: Meerson’s machine attracts the attention of the politicos, who see it as a way of consolidating power, leaving the scientist no choice but to climb into the contraption herself and decamp for another time, hoping ‘to prevent the entire universe from being reshaped in the image of a bunch of thugs and reduced to ruin.’ That’s hard enough to do in our linear world, but when you throw Einstein into the mix, and tinkering with one moment in time affects all other moments, well, it’s a hell of a lot trickier than rocket science.
“Yes, Pears handles his vertiginous narrative with remarkable legerdemain, but that’s only one part of this novel’s appeal. As the characters intermingle in multiple time frames, as Rosalind teaches the men of Anterworld a thing or two about women, as Angela learns that emotions power more than mathematics, as Henry discovers that characters in fiction can take on a life of their own ‘through sheer force of personality,’ we are struck with the improbable ability of human beings to connect with one another, in the flesh and across time.
“Arcadia is a novel about the power of narrative, both to corrupt and to humanize. Like most great ‘translit’ fiction — David Mitchell’s The Bone Clocks, Haruki Murakami’s 1Q84, and Nick Harkaway’s Angelmaker — Pears’ genre-bending, time-collapsing tour-de-force dazzles us with world building, but, beyond that, it reminds us that the people in those worlds survive by their stories and by the way those stories reverberate backward and forward, achieving, if only now and again, the perfect harmony we all crave.” —Bill Ott, in a starred review for BOOKLIST 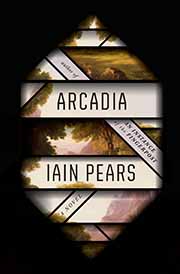 From the beginning of the book: Imagine a landscape. Bathed in sunshine, sweet-smelling from the gentle shower that fell overnight then stopped as dawn broke. A dense grove of holm oak stands at the foot of a hill, damp with the drops of soft-sounding water which leaves the ground moist but firm underfoot. In the distance a sliver of water, bright and glittering, reflects the brightness of the sky. The wide river is of a blue so translucent that it is almost indistinguishable from the heavens above. Only the vegetation marks the division between the fields and the range of low-lying hills beyond. It is warm now, but will be hot later on; there is not a cloud to be seen. Down by the river, there are the harvesters with their pitchforks, fanning out across the field, some already at work.

Tags: An Instance of the Fingerpost, Arcardia, Fiction, Iain Pears, Knopf
Posted in Media Center, Not on Homepage | No Comments »