WHAT: A STAR FOR MRS. BLAKE, a novel

WHERE: Set in Maine and in France.

WHY: “Captivating and enlightening.
“A heartfelt glimpse into a little-known episode in U.S. history, the journey taken by mothers of U.S. soldiers fallen in WWI to visit their sons’ graves in Europe. Smith focuses on five mothers whose sons were buried at the Meuse-Argonne American Cemetery in France. Their unofficial leader is Cora Blake, a single mother from Maine. She’s joined by an Irish maid, the wife of an immigrant Russian chicken farmer, a woman who’s been in and out of mental institutions since her son was killed, and a wealthy Boston socialite.
“Smith deftly spotlights moments along their sojourn, from the giggling fits brought on by the French delicacies they are served on board ship to the tears they shed when confronted by the stark white lines of marble stones where their sons’ remains now lie. Side plots revolve around an American journalist, badly disfigured in the war, who befriends Cora and publishes her story in a French newspaper, and the practice of racially segregating these mothers, even in their grief.”
—Deborah Donovan, in a starred review for BOOKLIST

“A touching story. Smith captures the mothers’ interactions in beautiful detail and delves into the government’s not-so-entirely-altruistic reasons for sponsoring the trip.” —PUBLISHERS WEEKLY 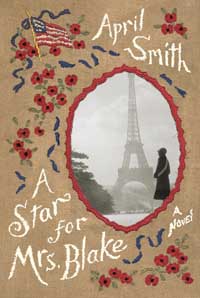 “A beautiful and unforgettable novel…
both personal and universal.
Writing A Star for Mrs. Blake must have been a labor of love and it shows on every page. Everyone who has served or is serving in the military, and also their families and friends, should read this book.”
—Nelson DeMille

“April Smith’s poignant and tender story is one you will never forget.” —Fannie Flagg