WHAT: DICTATOR, a novel

WHERE: Set in Ancient Rome.

WHY: “Engrossing.
“Set during the last gasp of the Roman Republic, the final volume of Harris’ Cicero trilogy chronicles the great Roman statesman’s fateful encounters with both Julius and Augustus Caesar.
“Harris has written smart, gripping thrillers with settings as varied as England during World War II and the contemporary world of international finance, but his Cicero novels are more akin to Hilary Mantel’s Wolf Hall in their subjects — men of towering intellect and humanity — and in their visceral evocation of history.
“The first two books, Imperium and Conspirata, recounted events familiar only to classical history buffs — Cicero’s rise from relative obscurity to become one of Rome’s leading lawyers, orators, and writers and, in 63 BCE, getting the top job, consul.
“This third book starts with his exile after running afoul of Julius Caesar, the brilliant general whose dangerous ambition Cicero alone seems to grasp. The plot hurtles toward the most famous incident in all of Roman history — the assassination of Caesar. Cicero is not involved in the plot, but he assumes a major role in its aftermath as Mark Antony, an enemy, and Octavian (later Augustus), a young friend who is also Caesar’s adopted son, vie for leadership of the empire.
“The book is charming as well as engrossing, largely due to the immensely likable person of Cicero, who is wise but not pedantic, moral but not sanctimonious, courageous but wary of the grandstanding of the martyr. In Harris’ hands, the other principle actors emerge fully rounded: Cato, the uncompromising stoic; Pompey, brave but vainglorious; Crassus, greedy and self-serving; Brutus, whom Cicero feared ‘may have been educated out of his wits’; Julius Caesar, whose ‘success had made him vain, and his vanity had devoured his reason’; and Mark Antony, who ‘has all of Caesar’s worst qualities and none of his best.’ Unfortunately for Cicero, his assessment of Octavian—’he’s a nice boy, and I hope he survives, but he’s no Caesar’ — proves fatally wrong.” —KIRKUS, a starred review

“The thrilling final volume of the author’s trilogy about Cicero.
The cast is extensive, but the plotting is brisk, and Harris never loses sight of his themes, or his protagonist’s relevance for today.” —Sarah Johnson, BOOKLIST

“As skillful as it is sobering.
Its gripping dramas and powerful themes – the fragility of democracy and the fallibility of human beings among them – richly illuminate the conflicts its era and our own.”
—PUBLISHERS WEEKLY 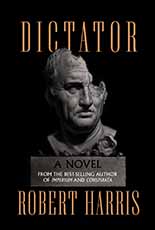