WHAT: AUTUMN LIGHT:
Season of Fire and Farewells

WHY: “An engrossing narrative, a moving meditation on loss, and an evocative, lyrical portrait of Japanese society.
“Aging, death, and family fracturing are seen through the lens of Japanese culture in this luminous memoir. Pico Iyer, a British-Indian-American novelist and Time journalist who lives in Japan with his Japanese wife, Hiroko, recounts their efforts to cope with her father’s death, her mother’s entry into a nursing home, and her estrangement from her brother.
“He revisits Hiroko’s family stories, explores Japan’s mourning rituals as she tends relatives’ graves and offers cups of tea to her father’s spirit, and probes the feelings of guilt and betrayal — especially when her mother wants to live in their home — that rites can’t assuage. Iyer weaves in sharp observations of a graying Japan, particularly of the vigorous but gradually faltering oldsters in his ping-pong club, and visits to the Dalai Lama, a family friend, who dispenses brisk wisdom on life’s impermanence.
“The book is partly a love letter to the vibrant Hiroko, whose clipped English unfolds like haiku, and it’s partly an homage to the Japanese culture of delicate manners, self-restraint, and acceptance that ‘sadness lasts longer than mere pleasure.'”
—PUBLISHERS WEEKLY, a starred review

“With his trademark blend of amiability, lighthearted humor, and profound observations, Pico Iyer celebrates emotional connection and personal expression, and he upholds death as an affirmation of life and all its seasons.”
—Jonathan Fullmer, in a starred review for BOOKLIST

In the deer park, an old woman has set herself on a bench, to transcribe the autumn colors in a sketchbook. Two toddlers are stumbling their way into learning to walk on the grass nearby. A deer is chasing some poor visitor into the store next to where special “deer cookies” are on sale for the equivalent of $1.50 each. If they are true messengers of the gods, the deer speak for gods as ungovernable as Zeus and Hera.

Around me there’s a chorus — “Waaah, aren’t the maples beautiful!” — and the chorus itself lends brightness to the day. A woman leads her dog, wrapped in a red blanket, up a slope and stops and tilts her head up, up, up, to where the leaves are picked out against the blue. “Quite something, no?” she says to her four-legged companion.

A young girl, in a denim jacket with frills, guides her grandmother, very slowly, by the hand, then sets her down in front of the turning leaves, a classic autumn tableau. “Would you like…?” a passing woman suggests, and the girl hands over her camera and hurries off to take her place next to the old lady.

“Now you?” asks the granddaughter, springing up.

Across the world, people are marking the Day of the Dead today, but in the park, the air so cleansed that the trees seem to gleam in the freshened morning, it’s not skeletons I see so much as aging elders struggling for breath. Dying is the art we have to master, it seems to say — not death; late love settles into us as spring romances never could. 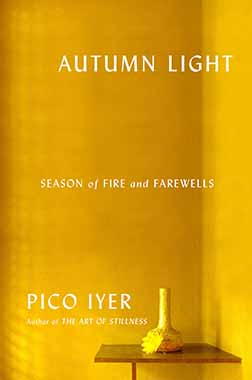