Media Center: ‘Musorgsky and His Circle’ by Stephen Walsh

WHAT: MUSORGSKY AND HIS CIRCLE:
A Russian Musical Adventure, by Stephen Walsh

WHY: “A masterpiece of Russian cultural history.
“Few influential artistic friendships have had more participants, lasted longer, or been more consequential than that of five Russians who stormed the heights of Western music in the third quarter of the nineteenth century.
“Though Mily Balakirev, Aleksandr Borodin, César Cui, Modest Musorgsky, and Nikolay Rimsky-Korsakov did have predecessors—principally Mikhail Glinka—in building a truly Russian art music, they put it on its feet despite lack of musical education beyond piano tutoring anywhere in Russia (only Rimsky-Korsakov had academic training), of career paths for musicians in Russia, and of encouragement by Russian elites.
“As the title of Walsh’s brilliant volume signals, the greatest of these composers is now considered to be Musorgsky, whose work was so structurally unusual for its time that most 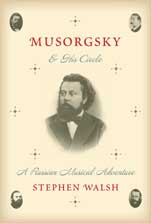 of it wasn’t performed as he wrote it until the later twentieth century. In absorbing dicusssion of virtually every bit of his production, Walsh argues that Musorgsky invariably chose emotional expression and the rhythms of Russian speech rather than the rules of classical form to shape his music, outstandingly in his 60 songs and transcendent opera, Boris Godunov. Walsh discusses the most ambitious works of the other four musical friends with similar penetration as he unfolds the life and career trajectories of all five, constantly bedeviled by lack of time to compose and shortage of venues for performance.”
—Ray Olson, in a starred review for BOOKLIST

“Walsh meticulously details the absorbing lives of these idiosyncratic Russians…with a careful eye trained on the qualities that made the Kuchka’s music so revolutionary.” —PUBLISHERS WEEKLY