Behind the Scenes of Maggie Shipstead’s Astonish Me

Perhaps the most gratifying thing about reading Maggie Shipstead’s Astonish Me isn’t that it so perfectly captures the insular world of dance, or that it spins a poignant multi-generational family story—but that the novel interweaves the two in such an exhilarating, flawless way. We’re very excited to present an exclusive essay from Shipstead, in which she reveals that the source material for both can be found in her own childhood. Read on for a behind-the-scenes look at Astonish Me, and its author’s personal connections to three fascinating aspects of the novel.

Like all novels, Astonish Me emerged from some murky hotspot in the subconscious ooze of its author’s mind. In this case, we’re talking about my mind. My ooze. I can identify lots of the ingredients that went into this book—personal preoccupations, historical events, bits of ballet gossip, places I’ve spent time—but not all of them. Sometimes a character or an incident or a bit of dialogue just kind of showed up, like a stray cat or an unexpected letter. But here are the origin stories of three elements of the book. 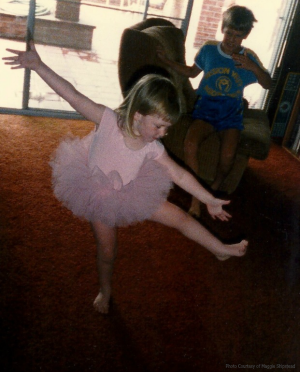 I’m not a dancer. (Definitely not.) But ballet has always been a part of my life thanks to my mom, a serious and lifelong fan. She signed me up for a ballet class when I was five, but it was pretty clear right away that I had the wrong body and no talent.

Fortunately, she didn’t really care if I danced. She just wanted someone who would go with her to the ballet, and I was willing. From when I was in kindergarten until I left for college, we went to about four ballets a year together. I still go to the ballet when I can; sometimes Mom and I manage to go together when I’m home.

Ballet is so beautiful to me, so moving in the way dancers work almost unbearably hard, every day, in order to create something that appears effortless. The title of my book comes from something Diaghilev said to the Ballet Russes—“Étonnez-moi,” or, in English, “Astonish me.” It was half command, half dare, and I think he perfectly articulated what we’re always hoping for at a live performance. The moment the lights go down is a moment of possibility. We want to be thrilled and amazed, to be transported by art. 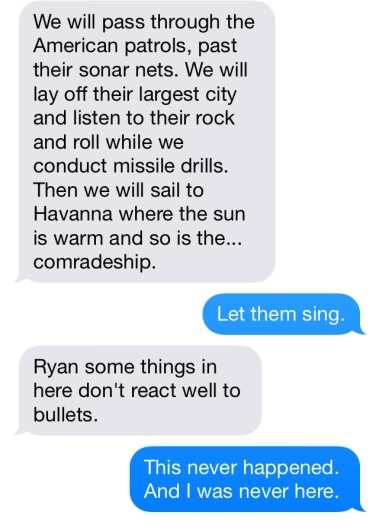 2. The Hunt for Red October

In Astonish Me, a man takes his son to see The Hunt for Red October in the theater in 1990, and the kid is enraptured. I have a similar memory of going with my family to see it at the mall near our house when I was six. It’s been one of my favorite movies ever since. Sometimes my brother and I have entire text conversations that are just miscellaneous Red October quotes.

I’ve been fascinated by the Soviet Union and Russia since childhood, owing in some part to my desire to keep up with my brother and also to how my awareness of the larger world dawned just as the Cold War was ending.

Defectors were of particular interest to me—I was attracted to the drama of their risks and sacrifices. My mom told me about the famous ballet defectors—Balanchine, Nureyev, Makarova, Baryshnikov. What was it like to run out the back door of a theater in Toronto, as Baryshnikov did in 1974, and find yourself in a new life, a new world? Ballet, I came to understand as a child, was so important to some people that they would make the wrenching choice to give up their countries and leave behind loved ones for the sake of artistic freedom.

In conclusion, The Hunt for Red October is a great movie. 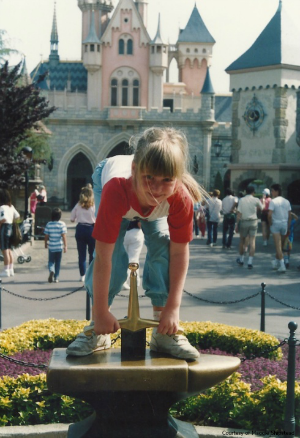 I grew up in Orange County, California, not far from Disneyland. For a while in the mid-’80s, my mom and brother and I had season passes. (My dad hates crowds and was happy to be left behind.) Childhood birthday parties were often held at Disneyland. My elementary school orchestra played there once and got to go backstage where Mickeys and Minnies walked around without their heads. For grad night in high school, Disneyland, full of SoCal seniors, stayed open all night.

Astonish Me started out as a short story that I couldn’t quite get to work and evolved into a novel almost accidentally as I revised, gaining pages with every draft. When the Disneyland chapter occurred to me somewhere during my third big revision, I went on YouTube and found a trove of home videos from Disneyland in the mid-’80s that showed old paint colors, attractions now long gone, a less-crowded park with less junk for sale. It was eerily familiar. I could have been one of the kids in the videos.

Astonish Me contains by far the most writing I’d ever done about the place and era of my childhood, and putting Reagan- and Clinton-era Orange County into my fiction turned out to be a pleasure. In fact, this book will probably be the most pleasurable writing experience I ever have. Because I didn’t initially conceive of Astonish Me as novel—indeed, it was well on its way to being a novel before I even accepted that possibility—I was writing for my own enjoyment and amusement. I thought about what I wanted to happen. I tossed in things I like. The end result is a book that bears almost no resemblance to my life but is still recognizably, intimately mine.