WHAT: THE BANGKOK ASSET, a novel

WHERE: Set in Bangkok, of course.

WHY: “Wild and entertaining.
“An unusual crime scene disturbs Sonchai Jitpleecheep in Burdett’s wild and entertaining sixth novel featuring the Thai homicide detective. Near the corpse of a 12- or 13-year-old girl, whose head seems to have been pulled off her body by sheer brute force, someone wrote a message in the victim’s blood indicating that the writer knows who Sonchai’s father is.
“Before he can really process this suggestion regarding his unknown biological father, Sonchai witnesses two men throw a woman off a boat to drown in the Chao Phraya River during a storm. The tragedy only gets weirder when video of the crimes shows that the boat’s other passenger, an enormously strong ‘tall blond farang,’ swimming to shore against a raging current. That man is seen meeting with Joseph Goldman, a CIA spook, who was involved in notorious mind-control experiments.
“Impressively, everything comes together for a dramatic and satisfying, though downbeat, ending.” —PUBLISHERS WEEKLY 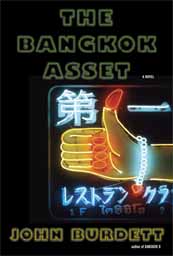 From the beginning of the book: So I’m at my desk in the open-plan area of District 8 Police Station when a rumor blows through the room similar to a gust of wind in a rice paddy. Like Big Data, Big Rumor has no obvious source or contact point and is not coherent until you join up all the different packets of information: Behind the station; In the market square; Male or female? Not sure; Young or old? Unclear; So, what? Dead; How? Murder or natural causes? Unclear; When? Who knows? Who found the corpse? Dunno.
One day someone will produce an award-winning thesis to show why information that arises from close in is invariably more garbled than that which comes from a distance. In a more remote case I would have expected precise details and a named informant and clear orders to investigate. Here, though, with the scene of crime less than five minutes’ stroll away, cops and staff simply turn their heads and stare at me. Pretty soon everyone including the tea lady has turned to look at the only homicide cop in the room on duty and available. I shrug and stand up, ready to do my duty: even if there was no foul play, in a case of sudden death you still need a murder cop to say so before anyone will believe it. Anyway, I’m as curious as everyone else. And, yes, it is easier to descend the emergency stairs to leave the building by the rear entrance and cross the soi to the market and ask the first vendor I see where the body is than to wait for some official order to investigate.