WHAT: THE BED MOVED, stories

WHERE: The author lives — and sleeps — in Brooklyn.

WHY: “Schiff’s startlingly honest, deliciously wry stories herald the arrival of a beguiling new talent.
“A talented young writer explores sex, death, and family relationships in this spare, enticing story collection. ‘I only know about parent death and sluttiness,’ Schiff declares in ‘Write What You Know,’ the final story in her arresting debut collection. ‘What else do I know?’ She goes on to list a host of other topics—’the psychology of Jewish people who have assimilated,’ ‘liberal guilt and sexual guilt and taking liberties sexually,’ ‘unrequited love, and love that was once requited, but not for very long’ among them—all of which we’ve already gleaned from devouring the irresistible stories here.
“But Schiff leaves out one thing: she also knows how to seduce a reader as blithely as some of her characters casually bed men, writing in stylishly simple and almost staccato prose, beneath the surface of which we soon spot roiling emotions—feelings of loss, the urge to connect.
“The young women and girls we meet here sleep around and suffer consequences (‘The Bed Moved’) or don’t (‘Little Girl’). They help their fathers (‘Longviewers’), mourn them in expected ways (‘Another Cake’), and absorb posthumously revealed paternal secrets (‘http://www.msjiz/boxx374/mpeg’). They explore the possibilities of budding sexuality at nerdy Geology Camp (‘Schwartz, Spiegel, Zaveri, Cho’) and the limits of proud promiscuity (‘Tips’). Some of the 23 stories in this slim volume are amusingly out there (‘Rate Me’; ‘Communication Arts’); others hit close to home. But after taking them all in, we may find ourselves quite taken with this distinctive new voice in fiction, hungry for more of it and—like the collection’s titular bed—moved.” —KIRKUS, starred review

“A fresh, varied collection that will resonate with readers.
Consistently and darkly funny, Schiff makes light of her characters’ dilemmas, but never belittles their genuine distress.” —PUBLISHERS WEEKLY 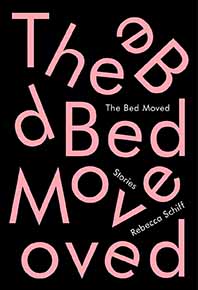 From the beginning of the book: There were film majors in my bed—they talked about film. There were poets, coxswains, guys trying to grow beards.
“Kids get really scared when their dad grows a beard,” I said.
Finally, I had an audience. I helped a pitcher understand the implications of his team’s hazing ritual. I encouraged indecisive dancer-anthropologists to double major. When a guy apologized for being sweaty, I got him a small towel. I made people feel good.
Then I took a break. Then I forgot that I was taking a break. Spring was here. Jake was here. Also Josh. One dancer-anthropologist dropped anthropology, just did dance. He danced with honors.
“Mazel tov,” I said.