WHAT: PERFIDIA, a novel

WHERE: The novel is set in Los Angeles.

WHY: “A sprawling,
uncompromising epic of crime and depravity.”
—PUBLISHERS WEEKLY, a featured review

“Ellroy is not only back in form — he’s raised the stakes.
This worm’s-eye view from thoroughly corrupt Los Angeles is a war novel like no other.” —KIRKUS, a starred review

“Disturbing, unforgettable, and inflammatory
…It’s an ugly picture, but just try looking away.
“The first volume of what is being billed as the Second L.A. Quartet, Perfidia marks both a return to the scene of Ellroy’s greatest success and a triumphant return to form.
“On the eve of Pearl Harbor, a Japanese family is found dead in their home, apparent victims of ritual suicide. Inconsistencies suggest that it might be murder—but, as the city reels from next morning’s act of war, there is pressure to fit the facts to the crime. Police chief Clemence ‘Call-Me-Jack’ Horrall demands a solution by New Year’s, and Dud Smith is only too happy to oblige. Others demur, but with L.A. caught in a sudden squall of wartime hysteria, their objections are blown away in the storm. As ordinary citizens act out against the ‘Japs’ and police round up suspects, plans are being made to intern the Japanese, seize their property, and turn a nice profit in the bargain. Meanwhile, clandestine short-wave radios and a submarine attack raise the fear that a Fifth Column is collaborating with the enemy, rendering the entire California coast vulnerable — but is the Fifth Column real or imagined?
“Longtime Ellroy readers will be gratified to see practically the full cast of the L.A. Quartet and some characters from the Underworld U.S.A. trilogy, from Bucky Bleichert and William Parker to Ward Littell and J. Edgar Hoover (with a notable cameo by Elizabeth Short), but the most fascinating creation is a newcomer, Hideo Ashida, a gifted forensics man whose job is complicated by his Japanese nationality, his homosexuality, and his inability to choose between would-be patrons Smith and Parker. Smith, Parker, Ashida, and Kay Lake, a bohemian recruited to infiltrate a cell of well-meaning Communist sympathizers, form the key quartet in a typically labyrinthine, byzantine, cast-of-dozens (even Bette Davis plays a part!) effort. Evidence is suppressed, confessions are coerced, plots are hatched, allegiances are broken, and the case is solved—after a fashion.
“As the novel builds to its fever-dream climax, Ellroy’s wartime L.A. evokes William S. Burroughs at his surreal and satirical best. It’s a landscape where insomniac obsessives fight and fornicate fueled by drugs and alcohol, rifle squads roam the streets wearing shrunken-head lucky charms, and policemen pose their kids for pictures with a murder suspect called the Wolfman. Ashida summarizes it succinctly: ‘Land grabs, plastic surgery, blood libel. Rogue cops, sub attacks, a lynch-mob massacre…Secret radios and feigned seppuku. The haughty Left and the bellicose Right. A grand alliance of war profiteers.” All he leaves out, perhaps, are the smut films, sexual perverts, and Nazi sympathizers.” —Keir Graff, in a starred review for BOOKLIST 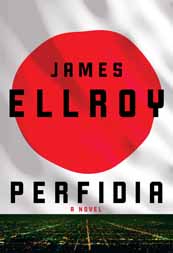