WHAT: SELECTED LETTERS OF LANGSTON HUGHES
and THE WEARY BLUES

WHERE: Hughes was born in Joplin MO
and for much of his life lived in Harlem.

WHY:
“A rich and intimate portrait of an extraordinary writer.
“Best remembered as a Harlem Renaissance writer, Hughes had a career that spanned five decades in which he wrote poems, novels, plays, children’s books, and screenplays that challenged assumptions about the talent of black writers and the aspirations of black people. He was also a prolific letter writer, as this collection attests.
“Hughes biographer Rampersad joins Roessel to offer a collection that reflects on Hughes’ personal and artistic development, a supplement to his autobiographical works, The Big Sea (1940) and I Wonder as I Wander (1956). The collection begins in 1921, the year Hughes’ poem ‘The Negro Speaks of Rivers was published, and ends in 1967. His relationships with other black writers is fully on display, from a close friendship with Claude McKay to friction with Zora Neale Hurston and James Baldwin, as well as his support and encouragement of young writers, including Alice Walker. The collection contains letters to Arna Bontemps, Countee Cullen, Alain Locke, Richard Wright, Amiri Baraka, and others. In his correspondence with publishers and Carl Van Vechten, supporter of black writers, Hughes navigates complex business and racial politics to maintain his dignity as a black writer.
“The letters trace Hughes’ survival of five decades of changes in politics and culture through the Harlem Renaissance, the Red Scare, and rising black nationalism.”
—Vanessa Bush, in a starred review for BOOKLIST

“An extraordinary book.”
—Pam Kingsbury, in a starred review for LIBRARY JOURNAL

“A privileged perspective on the man and his art.”
—KIRKUS REVIEWS 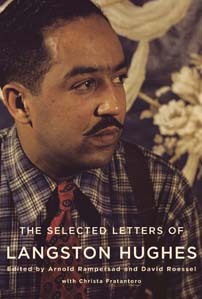 From the beginning of the book:
“Who knows better than I,” Langston Hughes once wrote to a friend, “what letter writing entails?” Certainly he knew much about letters. With a crowded life that put him in touch over the decades with thousands of people, the mail was crucial to starting and keeping friendships and to doing business. He admired people who answered letter promptly. His friend Carl Van Vechten, for example, received a flood of mail but usually answered each piece on the day it reached him. Hughes was not so disciplined. In fact, at one point he called himself “the world’s worst letter writer.” Another time, he confessed to stuffing away a swelling pile of unanswered pieces. “Two drawers are full,” he noted, “so I’m moving my sox over.” All the same, he wanted to be a faithful correspondent. “I leave you now,” he ended a letter in 1944, “to consider the stack of mail on top of mail piled on the bed. I cannot take my rest until I unpile some of it.”

Edited by Arnold Rampersad and David Roessel with Christa Fratantoro.

Also being published, to coincide with the release of his selected letters, a celebratory edition of Langston Hughes’ first volume of poems, nearly ninety years after its first publication… 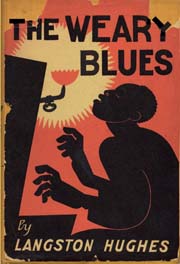 “The Weary Blues belongs on every bookshelf.
Langston Hughes’ now classic debut collection was first published in 1926. This handsome edition, appearing in conjunction with Selected Letters of Langston Hughes, contributes to a resurgent appreciation for how profoundly catalyzing Hughes’ poetry has been, initially as part of the Harlem Renaissance and ever after as a source of illumination and inspiration.
“Hughes begins with poems driven by the sexy, despair-defusing energy of blues and jazz, then moves on to exquisite and mournful love and nature poems, gradually widening the aperture to take in the larger picture of black lives, an encompassing perspective signaled by the oft-quoted line, ‘My soul has grown deep like the rivers.’ In his expert, richly wrought foreword, poet and scholar Kevin Young explains why these poems were so revolutionary and why Hughes’ daring embrace of humanity and freedom—along with his ‘celebrating, critiquing, and completing the American dream, that desire for equality or at least opportunity’—remain so electrifying, significant, and necessary now, culminating in the anthemic line, ‘I, too, am America.'”
—Donna Seaman, BOOKLIST

With a new Introduction by Kevin Young.