WHAT: THE BOOK OF ARON, a novel

WHERE: The author lives in Williamstown, MA.

WHY: “This magnificent tour de force will hold a prominent place in the literature of compassionate outrage.
“Aron is a hopelessly inept Jewish village boy who despairs over his inability to learn the most basic things. Yet he discovers hidden strengths and talents when his family moves to Warsaw, and the Nazis erect the walls that formed the Jewish ghetto, hell on earth for hundreds of thousands of brutally confined, starving people.
“Newly enterprising and courageous Aron helps his family, whose hilarious argumentativeness keenly captures the resiliency of the Jewish spirit, by scrounging, stealing, lying, and smuggling as corruption and coercion become the order of the day. With other brave, crafty, and hungry children, he forms a band of intrepid looters, only to become entangled with a treacherously venal policeman. As life grows impossibly dangerous and terrifying, and families are taken away to be gassed, Aron finds refuge with the real-life Warsaw Ghetto hero, Janusz Korczak, a Jewish pediatrician and children’s advocate who founded an orphanage and refused to abandon those in his care.
“Shepard, a writer of extraordinary historical vision, psychological acuity, and searing irony, presents a profoundly moving portrait of Korczak; explores, with awe, our instinct to adapt and survive; and through the evolving consciousness of his phenomenally commanding young narrator, exposes the catastrophic impact of war and genocide on children.” —Donna Seaman, in a starred review for BOOKLIST

“Exhaustively researched and pitch-perfect.
An understated and devastating novel of the Warsaw ghetto during Nazi occupation, as seen through the eyes of a street-wise boy.” —KIRKUS, a starred review

“Heartbreaking, but also inspiring.
Few will be able to read the last terrible, inspiring pages without tears in their eyes. Indispensable reading.” —Patrick Sullivan, in a starred review for LIBRARY JOURNAL 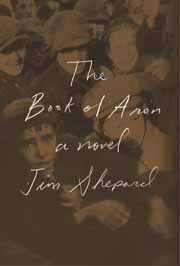