‘Promise of Elsewhere’ by Brad Leithauser

WHAT: THE PROMISE OF ELSEWHERE, a novel

WHERE: The author lives in Baltimore and Amherst.

WHY: “Endearingly and
wonderfully human at every moment.
“The latest offering from Brad Leithauser, a long-revered poet and novelist, is a serene piece of travel fiction starring Louie Hake, an art-history professor who teaches at an unremarkable college in Ann Arbor.
“Louie has had a rough few months: he has recently been diagnosed with a degenerative vision disorder, his students seem disinterested, and his second marriage has collapsed in tragicomic fashion. To escape the perceived public shame, he jets off—in the face of fierce opposition from his overbearing older sister — to see the wonders of the architectural world found in Rome, India, and Japan. In Italy, however, he throws out his spectacular itinerary to instead head to the drearier surroundings of London, where he drifts in and out of the lives of some wonderfully fascinating fellow travelers. As he restlessly keeps moving, Louie is pulled in numerous contradictory directions: he wants complete isolation, away from all digital connectivity, but simultaneously wants to reconnect with his first wife, get his current wife back, and possibly find new love.
“Like Andrew Sean Greer’s Pulitzer Prize–winning Less, Leithauser’s journey novel wonderfully mixes pathos and comedy, and Louie, as he struggles for a sense of value and self, is endearingly and wonderfully human at every moment.”
—Alexander Moran, in a starred review for BOOKLIST

“A keen-eyed comic work.
Leithauser recalls Stanley Elkin, Wilfrid Sheed, and Richard Ford in this complex anatomy of a midlife crisis and then some. An exceptional glimpse of the human comedy marked by sometimes dazzling prose.” —KIRKUS, a starred review 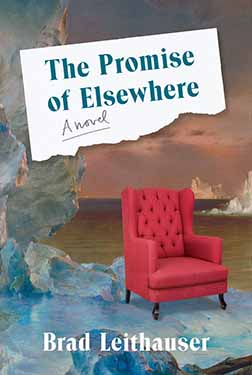