WHERE: Israel and the Middle East

WHY: “An authoritative, sweeping, important history that shows how terrorism ‘is neither irrational nor desperate but instead entirely rational and often carefully calculated and choreographed.
“Terrorism scholar Bruce Hoffman draws on British, Israeli and American archives, uncovering much new material, in this history of Zionists’ determination to oust the British from Palestine.
“Terrorism, carried out by two rival groups—Irgun and the more extreme Lehi—resulted, after 30 years of violence, in British withdrawal and the creation of Israel. Britain’s presence had been authorized by the Mandate of Palestine, a consequence of the defeat of the Ottoman Empire in World War I. By 1929, despite improvements to infrastructure and standard of living, both Arabs and Jews were seething with resentment. And it worsened: In the 1930s, hundreds of thousands of Jews fleeing the Nazis pressed for permission to immigrate, incensed over Britain’s quota; Arabs, threatened by an increase in population, formed marauding guerrilla bands.
“With British soldiers fighting the war, the police force was inadequate and demoralized. In 1938 alone, 5,708 terrorist incidents occurred. Of more than 90 protagonists in this teeming drama, Menachem Begin emerges as one of the most violent, the mastermind behind the horrific bombing of the King David Hotel in 1939.
“Winston Churchill, with considerable understatement, admitted that Britain’s Mandatory administration had been ‘a thankless, painful, costly, laborious, inconvenient task.’ Hoffman concludes that the ‘rise of Israel was the product of many powerful forces in addition to terrorism.’ But the Irgun’s success, he chillingly notes, laid the groundwork for today’s globalized terrorism.” —KIRKUS, a starred review

“A must-read for anyone interested in the origins of the State of Israel.”
—Joel Neuberg, LIBRARY JOURNAL

“Well-researched and highly detailed…
This account is thorough and well argued, and could have important implications in developing tactics to fight so-called ‘nonstate actors.'” —Jay Freeman, BOOKLIST 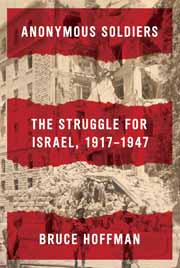 From the beginning of the book:
On May 14, 1948, at 8:00 a.m. sharp, General Sir Alan Gordon Cunningham, the high commander for Palestine and Trans-Jordan, emerged from his residence at Government House in Jerusalem to inspect an honor guard of the Highland Light Infantry. On the balcony above, a solitary bagpiper played a mournful lament. The sound of gunshots could be heard in the distance as Jewish and Arab snipers traded fire: the first Arab-Israeli war had already started. A bugle then sounded, and the honor guard came to attention. The Union Jack was lowered, and three decades of British rule in Palestine ended.