WHAT: CALCUTTA:
Two Years in the City

WHERE: Set in Calcutta.

WHY:
“The endlessly compelling story of modern India.
“Anglo-Indian novelist and musician Chaudhuri navigates the complicated business of Calcutta’s richly diverse Bengali-English makeup. Nostalgic and probing, the author’s account of his native Bengali city that was never really his own encapsulates countless humming, modern Indian stories. Once the British Empire’s colonial capital, an elegant Victorian, culturally diverse merchant town, Calcutta fell on bad economic times and into Marxist political turbulence from the 1970s onward, provoking the migration of the middle class and creating an enormous discrepancy of wealth.
“Chaudhuri, though born in Calcutta in 1962, grew up mostly in Bombay, though the author returned to Calcutta intermittently, spending holidays at his uncle’s house, before his parents moved back to Calcutta in 1989. Eventually, Chaudhuri found his voice as an author in a kind of ‘renaissance’ that the city also experienced at about the same time. He continually attempts to find within the Calcutta makeup ‘concordances’ with other places that he has found transformative and life-affirming.
“Educated in England, well-spoken and a member of the privileged bhadralok (genteel Bengali bourgeois) class, the author can move among castes for keen observations, from befriending the ubiquitous squalid street entrepreneurs on Free School Street to taking high tea with the Ingabanga Mukherjee couple on Lower Circular Road. Names fascinate the author, as they indicate the demise of the Bengali language, and he devotes an entire chapter to the recent mystifying elections. Ever a journalist, novelist and literary critic, he is transported by others’ stories and relays in his prose a vivid sense of time and place.” —KIRKUS REVIEWS 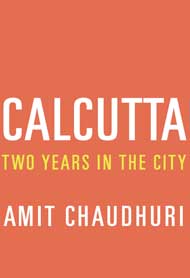 “An eloquent work. Chaudhuri draws on mostly tender, impressionistic memories of his hometown…He felt compelled to write about Calcutta because of the city’s down-on-its-hells modernity, edgy diversity, and Marxist politics; he was taken by Calcutta’s crumbling colonial glory and architecture, its Bengali bourgeois class that aped the English ways, its literary and articistic inheritance, and its enormous number of destitute immigrant workers…It became a kind of exotic mistress that the author could not quit.” —PUBLISHERS WEEKLY

“A global citizen’s view of the effects of globalization on a complicated, well-loved city.” —Michael Autrey, BOOKLIST