“This is essential reading for anyone interested
in Harper Lee and American literary history.
“Part one follows the career of Alabama preacher Willie Maxwell as five family members over several years die under mysterious circumstances, all with large life insurance policies held by the reverend, rumored also to be a voodoo priest. On June 18, 1977, Maxwell was shot dead in front of 300 people at his stepdaughter’s funeral in Alexander City, Ala.
“Part two focuses on his killer’s trial later that year, which Harper Lee attended. Along the way, Cep relates the history of courthouses, voodoo, Alabama politics, and everything one needs to know about the insanity defense. Part three charts the To Kill a Mockingbird author’s efforts to write about the trial, but in Alexander City she finds only myths, lies, and her own insecurities.
“By many accounts, Lee wrote a book and may have rewritten it as fiction, though no manuscript has ever been found. As to what happened to the years of work Lee did on the story, Cep notes, ‘Lee…was so elusive that even her mysteries have mysteries: not only what she wrote, but how; not only when she stopped, but why.'”
—PUBLISHERS WEEKLY, a starred review 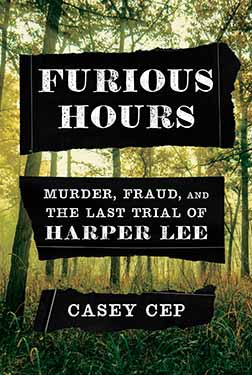