WHAT: CATASTROPHE 1914: Europe Goes to War

WHERE: Set in Europe.

WHY:
“Does the world need another book on that dismal year? Absolutely, if it’s by Max Hastings.
“When Austria mobilized to take revenge on Serbia for its role in the June 1914 murder of Archduke Ferdinand, Russia protested. Austria’s ally, Germany, warned it to keep its hands off. Russia’s response was only mildly threatening, but it wasn’t mild enough for the pugnacious German general staff. Deciding war was inevitable, they convinced a dithering kaiser, and the dominoes fell. Who’s to blame?
“Hastings shows modest respect for the German school, which blames Germany; historian Sean McMeekin, who emphasizes Russia’s role; and even Niall Ferguson, who believes that Britain should have remained neutral. He concludes that national leaders (mediocrities all, with a few frank dimwits) focused with paranoid intensity on selfish interests, that stupidity trumped malevolence, and that German paranoia won by a nose. World War I historians deplore the slaughter at the Somme and Verdun, but these pale in comparison to the final months of 1914, when modern weapons mowed down armies who still marched in dense masses led by mounted officers with colors flying and bands playing.
“Readers accustomed to Hastings’ vivid battle descriptions, incisive anecdotes from all participants, and shrewd, often unsettling opinions will not be disappointed. Among the plethora of brilliant accounts of this period, this is one of the best.”
—KIRKUS, starred review 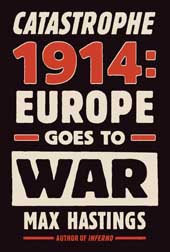 “This compelling reexamination of the commencement of the conflict represents an important contribution of the scholarship of the ‘war to end all wars.'”
—Margaret Flanagan, BOOKLIST