WHAT: THE SECRET HISTORY OF WONDER WOMAN

WHY: “A downright astounding work of discovery that injects new zest into the history of feminism.
“In her latest compelling book of historical sleuthing and resurrection, Jill Lepore chronicles the creation and assesses the impact of Wonder Woman, ‘the most popular female comic-book superhero of all time.’
“The tiara-wearing amazon burst forth in 1941, the brainchild of Charles Moulton (pen name of William Moulton Marston), a controversial, Harvard-educated polymath and huckster who invented the lie detector test and lived a life of deception. The first historian granted access to Marston’s private papers, Lepore tells a true tale nearly as outlandish as the plots Marston concocted for Wonder Woman. While Marston’s schemes led to precedent-setting court cases, he was living a daringly unconventional life with his wife, the diligent attorney Sadie Elizabeth Holloway; his student-turned-lover, Olive Byrne, niece of the great birth control advocate, Margaret Sanger; and the children he had with each.
“Lepore thoroughly covers their colorful lives and every aspect of Wonder Woman’s persona and adventures, including Marston’s penchant for depicting the superhero bound in chains, then breaking triumphantly free. Evidence of a fascination with bondage or a visual metaphor for overcoming the oppression of sexism? Lepore restores Wonder Woman to her rightful place as an essential women’s rights icon in this dynamically researched and interpreted, spectacularly illustrated, downright astounding work of discovery that injects new zest into the history of feminism.” —Donna Seaman, in a starred review for BOOKLIST.

“The surprising origins of a 20th-century goddess…It is an irresistible story, and Lepore tells it with relish and delight.” —KIRKUS REVIEWS 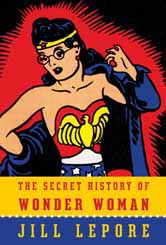 From the beginning of the book: Wonder Woman is the most popular female comic-book superhero of all time. Aside from Superman and Batman, no other comic-book character has lasted as long. Like every other superhero, she also has a secret history.
Superman first bounded over tall buildings in 1938. Batman began lurking is the shadows in 1939. Wonder Woman landed in her invisible plane in 1941. She was an Amazon from an island of women who had lived apart from men since the time of ancient Greece. She came to the United States to fight for peace, justice, and women’s rights. She had golden bracelets; she could stop bullets. She had a magic lasso; anyone she roped had to tell the truth. To hide her identity, she disguised herself as a secretary named Diana Prince; she worked for U.S. military intelligence. Her gods were female, and so were her curses. “Great Hera!” she cried. “Suffering Sappho!” she swore. She was meant to be the strongest, smartest, bravest woman the world had ever seen. She looked like a pin-up girl. In 1942, she was recruited to the Justice Society of American, joining Superman, Batman, the Flash, and Green Lantern; she was the only woman. She wore a golden tiara, a red bustier, blue underpants, and knee-high, red leather boots. She was a little slinky; she was very kinky.