WHAT: SLAYING GOLIATH:
The Passionate Resistance to Privatization and the Fight to Save America’s Public Schools

WHY: “A fervent defense of public education with abundant examples of how privatization has failed to deliver on its promises.
“An urgent appeal to prevent the privatization of our public schools. In her latest, education expert Diane Ravitch documents the failures of the ‘disrupters’ of public education — those who wish to privatize the public system — and celebrates the work of grassroots activists resisting the push for charter schools and vouchers at the expense of the nation’s schools. ‘The purpose of public schools,’ writes the author, ‘is to encourage students to think and act as citizens of a democratic society, prepared to do their part in making it better for everyone.’ In addition to the curriculum, public schools teach ‘integrity, honesty, civility, industriousness, responsibility, and ethics.’ Such schooling is undercut by poverty, inequality, and racial segregation as well as by the draining of financial resources away from public schools toward charter schools and vouchers for primarily religious schools.
“Throughout, Ravitch shows how the disrupters’ emphasis on standardized testing narrows the curriculum, encourages test preparation over instruction, and treats all students as if their needs are the same. The move to privatize public schools has been ‘funded by billionaires and financiers’ who oppose ‘accountability and transparency.’ This lack of accountability has led to numerous examples of financial corruption, all well documented by the author. Privatization, in Ravitch’s estimation, is wrong for any number of reasons—e.g., it involves public funds with private management; it promotes segregation (race, social class, religion, etc.); it takes away funding that rightly belongs to the public schools; it ‘is a direct assault on democracy’ in that it is not answerable to elected school boards. Furthermore, there is little or no evidence that charter schools or the voucher system have resulted in higher test scores.
“In response to this assault on public education, there have been successful grassroots struggles, many examples of which are chronicled by Ravitch.” —KIRKUS REVIEWS

“Incisive and meticulously researched…This extensive analysis is required reading for anyone concerned about American education.”
—Jacqueline Snider, in a starred review for LIBRARY JOURNAL 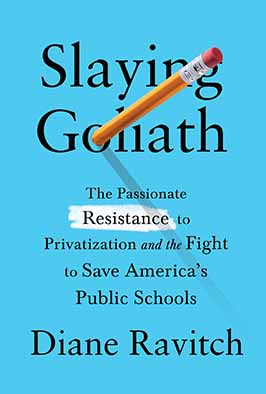